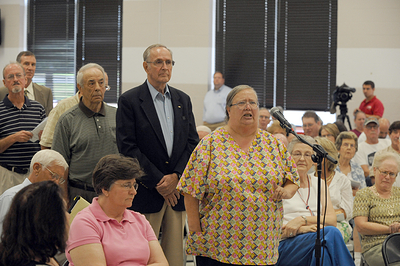 Congress’ approval rating—currently 13 percent, according to Gallup—is at a historic low, and its disapproval rating, at 84 percent, is at a historic high. Many Americans eagerly awaited Congress’ August recess so they could use town hall meetings and other public appearances to  give their elected officials a piece of their mind. There’s just one problem: most of Congress isn’t scheduling any town halls. None. Zilch.

The think tank No Labels called the offices of all 430 active members of Congress and found that 60 percent of them weren’t scheduling town hall meetings. According to No Labels’ analysis, more Democrats than Republicans are shutting themselves off from their constituents: 68 percent of Dems and 51 percent of Republicans hadn’t planned a town hall during Congress’ weeks-long summer break. (Click here to see if your representative or senator is planning a town hall or not.)

Not to be ignored, angry citizens, at least in one high profile district, have taken action to get some attention. Last week, a handful of unemployed constituents organized a sit-in in GOP Rep. Paul Ryan’s office in Kenosha, Wisconsin, while 100 protesters picketed outside. Ryan in particular has drawn heaps of criticism for his plan to eliminate Medicare as we know it and refashion Medicaid into a state-based block grant program. In the end, Ryan’s staff had police remove the protesters from the office, which was done peacefully.

Paul Ryan has made himself available during the recess—but for a price. That’s right: Ryan and other lawmakers are now charging constituents to attend public events and ask them questions. Ryan wanted $15 a head. Rep. Dan Quayle (R-Ariz.), Politico reported, is charging $35 from attendees who want to ask him questions over a catered lunch at a Phoenix law firm. Rep. Chip Cravaack (R-Minn.) also wants money—$10 a person—to attend an his event, which is hosted by the National Federation of Independent Businesses.

Why the ticket price? At the very least, it’s a way to weed out the unemployed and financially burdened, who are also the most likely to give lawmakers an earful for the dismal state of the labor market and sluggish economic recovery. As Scott Page, a twice laid-off worker who participated in the sit-in inside Paul Ryan’s office, told a local blogger, “I don’t have $15 to ask Rep. Ryan questions, so I guess this is the only means I have to talk to him.”