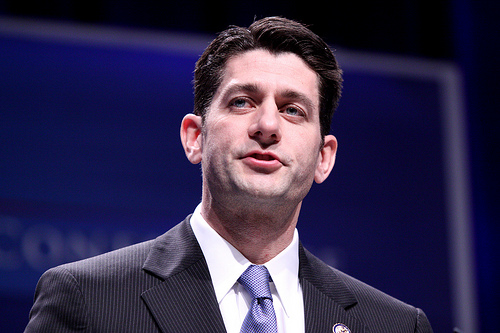 GOP Rep. Paul Ryan, the wonky Wisconsinite who has proposed privatizing Medicare and cutting other entitlement programs, was left red-faced a few weeks ago when he was spotted sharing two $350 bottles of wine at a posh French restaurant in Washington, DC. His drinking buddies: famed hedge fund “whiner” Clifford Asness and University of Chicago economist John Cochrane.

An embarassed Ryan told Talking Points Memo, which broke the story, that he didn’t know how much the wine had cost, and said he wouldn’t buy it again if given the choice.

But that wasn’t the last word on Ryan’s spending spree. On Wednesday, the Wisconsin Republican’s constituents gave him a taste of his own Pinot, staging a faux wine-tasting protest at Ryan’s office in Racine, in southeast Wisconsin, to highlight what they saw as the congressman’s stunning hypocrisy. “The symbolism of Paul Ryan sipping outlandishly expensive wine at fancy Washington bistro is in many ways more powerful than all the devastating statistics about his plan to destroy Medicaid and Medicare as we know them,” Robert Kraig, the executive director of Citizen Action of Wisconsin, said in a statement. “Ryan’s plan shifts precious public resources needed to make good on our national commitment to fund Medicaid and Medicare to the very people who can already afford to drink grossly overpriced wine—the wealthy and health insurance industry CEOs.”

Here’s a video of the protest: