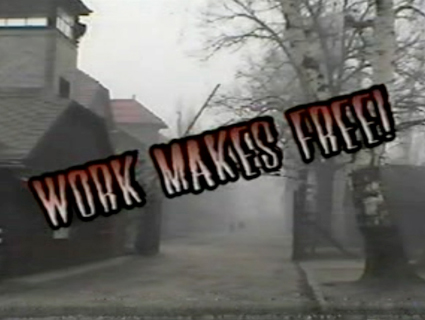 The words "work makes free"—a somewhat-garbled translation of the words that hung above the entrance to the Nazi-run concentration camp Auschwitz—are shown across the screen in a scene from the movie Guinea Pig Kids.

In a 2002 film highlighting her work as an education activist, Michele Bachmann endorsed the argument of her colleague, Michael Chapman, who claimed that state and federal education reforms were leading the United States toward its own Holocaust. Minnesota’s new curriculum standards, Bachmann contended, were going to “undermine our freedom and undermine our national sovereignty” and turn children into “global citizens.” The “brave new world” Chapman warned about, she said, wouldn’t be far behind.

Before Bachmann served in the Minnesota state Senate, led the tea party caucus in the House of Representatives, or ran for president, she worked as an education activist with a conservative group called the Maple River Education Coalition (MREC). Together with Chapman, Bachmann criss-crossed Minnesota, speaking to church groups and warning them about the dire consequences of state and federal education reform.

In the middle of all of this, Bachmann and Chapman made a movie.

Guinea Pig Kids is not, as its name might suggest, a B-list horror film. The impetus for the film was the Profile of Learning, a set of state curriculum standards adopted by Republican Gov. Arne Carlson’s administration in 1998. To Bachmann and Chapman, the standards were nefarious and part of a a far-reaching globalist plot.

As Bachmann and Chapman explained, a little-known federal program called Goals 2000, initiated under the Clinton administration but consistent with a similar plan supported by President George H.W. Bush, was paving the way for a national curriculum. The new curriculum, the two speakers maintained, moved the state away from established truths like the supposedly Christian founding documents, and replaced them with secular documents, such as the Universal Declaration of Human Rights, that allowed the state to craft its own set of values. Guinea Pig Kids was designed to explain “Minnesota’s new centrally-planned education, workforce & economic system and how citizens are trying to reverse it.” Over the course of the film’s two hours, Bachmann and Chapman did just that.

Viewed nine years later, with Bachmann the toast of the tea party and atop the polls in Iowa, the video is a testament to how far she’s come—and how little she’s changed. The movie, intended as an informational device as well as a fundraising tool for the MREC, depicted the duo’s multimedia-friendly presentation at a suburban Minneapolis church. It was a presentation they gave frequently over a three-year period, the product of, by their count, 5,000 combined hours of research. Both Bachmann and Chapman warned that unnamed bureaucrats were covertly stripping the nation of its moral foundation and leading it down the path to totalitarianism—even, Chapman suggested, to Auschwitz.

Bachmann, the star of the show (she gets first billing in the opening credits), wholeheartedly endorsed Chapman’s dire warnings in her half of the film. “As I was listening to Mike, I wondered—perhaps you had this same thought—I was wondering: Is this something that’s coming?” she said. “Or is this something that’s already here?”

She had bad news: “It’s already here, and it’s something that we have to deal with.”

She fretted that even mathematics were somehow being manipulated by the state. “How would you like it if you went into Herberger’s this weekend,” she said, alluding to a local department store. “[You] bought a blouse—gave a $50 bill for a $30 blouse. And the student said, well, here’s $5. And you said, ‘Hey, I deserve 15 more. What’s the deal’ And they said, ‘Well, that’s my mathematical worldview!’ You’d be knocking on the door of the manager so fast it would make your head spin!”

“This is where on paper these ideas sound sooo avant garde, so sophisticated,” she said, waving her hands in the air and widening her eyes. “But take these ideas down into the real world, where I live, where you live it, and it doesn’t pan out and it doesn’t make sense.” The state’s message, she claimed, was simple: “There is no truth.”

For Bachmann, education standards were the proverbial slippery slope. They were being designed by underhanded globalist bureaucrats who yearned to guide the United States toward a repressive society in which humans were just another resource to be used by the state. “Forget gobbledygook; think reality,” Bachmann said at one point in her presentation. “What has history shown us about planned state economies in the last 100 years? Think fascism, think communism, think socialism, think um, the state-planned economies—totalitarianism! Think Cuba! Do you want Cuba‘s economy? Or do you want the United States of America’s economy? Which one was planned, which one was free? Which one was private initiative?”

Chapman worried that these corrupt bureaucrats were placing government ahead of God. “They redefine words,” Chapman asserted. “‘Civic virtue.’ Doesn’t that sound wonderful? It is now redefined as ‘the dedication of citizens to the common good—even at the cost of their individual interest.’ Now you’re starting to see where we’re going. Because once you throw out God, that includes your individual liberty. So who’s the new God? Government.”

Bachmann and Chapman argued that the Profile of Learning fundamentally transformed the mission of public schools from teaching knowledge to preparing students for the workforce. Through a program called School to Work, businesses would work with schools to figure out which skills they would need for the new economy. In the two activists’ dystopian scenario, central planners would be able to prioritize certain fields (sustainable development, for instance) and bring up a new generation of workers whose loyalties were to the state. Work replaced knowledge as the central goal of education.

At one point Chapman quoted Hitler: “When an opponent declares I will not come over to your side, I calmly say: ‘Your child belongs to us already.'” And he framed the educational debate as an existential crisis. America, he insisted, had become the most powerful force for good in the history of the world on account of its moral foundation. Now education standards were putting all that at risk.

“Have we evolved beyond the capability of repeating the atrocities of the past? I don’t think so,” Chapman said. “In Nazi Germany the utilitarian worldview led to Auschwitz,” he continued. “And as the victims passed under the shadow of Hitler’s Final Solution, they were tauntingly reminded one last time that they have outlived their usefulness. The iron gates carried the message ‘arbeit macht frei’: Work makes you free.”

At this point in the film, an image of the concentration camp flashed on the screen, the Nazi slogan splashed across it in large red letters. “In America the truth makes us free,” said Chapman, pounding his fist on the lectern. “And it’s time we had the truth from the state about what this freedom is, or we’re gonna lose our freedom in the next generation. Mark my words.”

Even some MREC supporters felt Bachmann and Chapman went overboard in mixing education policy with their dystopian visions. As one Profile of Learning opponent wrote on the group’s website, in response to an earlier version of the presentation: “I attended one of their sessions recently in Edina in which a few people commented that the presenters seemed to use ‘scare tactics’ in their presentation,” she wrote. “While I know that is not their intent in presenting the facts of the [School to Work] and Profile of Learning systems, I, too, felt the same discomfort… I would just encourage them to cut out even more of the details in future presentations in order to eliminate the sense of panic, emotion, and conspiracy that was felt at this session.”

Bachmann critics often accuse her of pandering, of switching from social conservative red meat to small-government fiscal conservatism depending on the changing political winds. But Guinea Pigs II demonstrates just how deeply the two are intertwined: She was tea party before the tea party was cool. In 2002, with a Republican president in the White House and the tea party a full seven years away, she cited the 9th and 10th amendments while railing against No Child Left Behind as an unconstitutional abuse of power. All the while, she makes clear that her Orwellian concerns are, at their core, faith-based. Bachmann and Chapman were trying to scare their audience into seeing the truth: A plot was underway to steal their freedom. These days, she doesn’t speak in those terms, although she still claims freedom is under assault. But anyone wondering about the accuracy of her alarmist views might want to ask her, whatever happened to those guinea pigs?