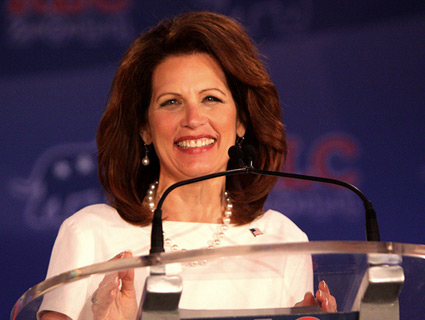 Few issues get Rep. Michele Bachmann (R-Minn.) going quite like lightbulbs. At campaign stops across the country, she has repeatedly denounced a 2007 law that required manufacturers to develop energy-efficient lightbulb varieties. Bachmann sees the law as an affront to American values. “I think Thomas Edison did a pretty patriotic thing for this country by inventing the lightbulb,” she told a New Hampshire audience in March. “And I think darn well, you New Hampshirites, if you want to buy Thomas Edison’s wonderful invention, you should be able to!”

In reality, no one’s stopping New Hampshirites (or anyone else, for that matter) from buying any kind of lightbulb they please—even the incandescent variety that Bachmann warns will be outlawed unless we pass the Better Use of Light Bulbs (BULB) Act that she supported. (BULB would repeal the energy-efficiency rules.) But Bachmann’s crusade is about much more than energy-conserving bulbs: The Minnesota congresswoman is part of a movement that considers “sustainability” an existential threat to the United States, one with far-reaching consequences for education, transportation, and family values. If Bachmann is right, lightbulbs will soon be the least of our worries.

Bachmann’s concerns may have been best articulated in an interview she gave to the American Family Association’s OneNewsNow in 2008. As Republicans in Washington revolted over the rising costs of gas, the then-freshman congresswoman outlined the stakes:

“This is their agenda—I know it’s hard to believe, it’s hard to fathom, but this is ‘Mission Accomplished’ for them,” she said of congressional Democrats. “They want Americans to take transit and move to the inner cities. They want Americans to move to the urban core, live in tenements, [and] take light rail to their government jobs. That’s their vision for America.”

Although she didn’t say it right then, Bachmann likely had something specific in mind: Agenda 21, a two-decade-old United Nations agreement that has taken on a life of its own on the far-right. The agreement, forged in 1992, nominally committed signatories to a set of shared values designed to mitigate the environmental impact of human development. Member countries agreed to a range of sustainability goals, from preserving the ozone layer to ensuring that forests are managed so they’ll be around for future generations. (The United States is a signatory, but the treaty has not been ratified by the Senate.)

But to some conservatives, Agenda 21 became something far more nefarious—a gateway to a global government built on a radical doctrine of secular environmentalism.

“Sustainability,” the idea at the heart of the agreement, became a gateway to dystopia.

As these conservatives saw it, the agreement paved the way for the entire planet to be controlled by a central bureaucracy: Humans would be cleared out of vast swaths of settled areas—like the Upper Peninsula of Michigan, for example—and instructed to live in “hobbit homes” in designated “human habitation zones” (two terms embraced by tea party activists). Public transportation would be the only kind of transportation, and governments would force contraception on their citizens to control the population level. A human life would be considered no more significant than, say, that of a manatee. “Sustainability,” the idea at the heart of the agreement, became a gateway to dystopia.

In Minnesota in the 1990s and early 2000s, the loudest opposition to sustainability came from the Maple River Education Coalition (later EdWatch), the nonprofit that gave Bachmann her start in politics. Under the group’s banner, Bachmann toured the state with an anti-Agenda 21 activist from the Twin Cities suburbs named Michael Chapman. Together, they spoke to church groups about the creeping “state-planned economy” that was instilling un-American values in children. (Bachmann’s office did not respond to a request for comment.)

Agenda 21, opponents feared, would require government and industry to work in concert to find a way to get future generations to stay in line. One of the result, they argued, was a little-known federal program known as “school to work,” which helps introduce students to various career options before they graduate from high school. But Bachmann and her allies insisted that, through this program, government bureaucrats would determine which industries to promote and funnel public-school students into those fields. They believed that public schools, meanwhile, would use the state’s new curriculum standards, which they claimed were rooted in UN principles, to foist globalism and sustainability on students.

When she arrived in St. Paul as a state senator, Bachmann brought those views with her. In a committee hearing in 2003 to discuss a clean energy bill, Bachmann broached the subject of Agenda 21. The term “sustainability” can have radical connotations, she warned, in the “brave new world of energy conservation,” and she voted for an amendment to remove the language.

As Bachmann explained to a perplexed chamber, sustainability, as defined by UN agreements like Agenda 21 and the UN Biodiversity treaty, would mean an end to resource extraction as we know it. “Last year in one of our committees, we had a guy come in and talk about the sustainable way of life,” she said. “And he gave the definition of sustainable, and it struck me as kind of odd. He said that what sustainable means is that we’ve already taken everything out of the earth that we’re going to take out.”

It wasn’t just lightbulbs, though. When four researchers from the University of Minnesota system were invited to brief Bachmann’s jobs committee about climate change in 2004, she came prepared with questions ripped straight from the anti-Agenda 21 playbook: Did the researchers believe the state should take steps to reduce its population? Did they intend to tell residents specifically where they should and should not live? The professors, whose presentations had mostly focused on things like the impact of warmer winters on the ice fishing industry, were at a loss.

Bachmann’s penchant for asking conspiratorial questions didn’t go unnoticed by her colleagues. Her Democratic opponents in the state senate came up with a nickname for Bachmann and her followers: “Black Helicopter Republicans”—a nod to fringe types who believe the United Nations is running covert missions in their backyards.

In the state Senate, Bachmann took up another favorite issue of Agenda 21 opponents—mass transit, which they believe will prompt the displacement of citizens into confined areas and the elimination of privately owned automobiles.

As the Minnesota Independent reported, Bachmann bashed “impractical and expensive” public transit in her campaign literature and called light rail a “black hole” for funding. She voted to cut off funding to a commuter rail project connecting St. Cloud to the Twin Cities—a line that cut through the heart of her future congressional district—and cosponsored a bill to abolish the regional rail authority.

When the state was pouring millions of dollars into a new light-rail line in the Twin Cities, Bachmann set out to undermine it. She and a colleague rode the rails, equipped with a video camera (audio), in an attempt to catch passengers riding without paying their fare. They set the video to the Star Wars theme song and invited colleagues from both chambers to watch the results. A few dozen of them, some supportive, some simply curious, showed up. “In the course of the film, they asked a very poor—potentially homeless—person on the platform ‘Couldn’t you ride for free?'” recalls Democratic state Rep. Alice Hausman. “And he said, ‘Well, yeah, you could, but the fine is $250, so who’d be so stupid to do that?’ It was almost like they didn’t get that it disproved their point.”

Bachmann is not the only Republican politician to raise concerns about the nation’s commitment to sustainable development—Rep. Ron Paul (R-Texas) has been a regular at the annual Freedom 21 conference, which promotes “property rights and free markets” as an alternative to Agenda 21. But Bachmann has helped bring the issue closer to the mainstream—at least within the conservative movement.

Last May, when American Policy Center held its annual Freedom in Action Conference in northern Virginia—a gathering dedicated exclusively to “connecting the dots” on “sustainable development and Agenda 21″—Bachmann recorded a welcome message. The congresswoman thanked attendees for their vigilance and sounded the alarm on the tyrannical nature of climate change legislation and the job-killing policies of the Environmental Protection Agency. And then, although she hadn’t formally announced her candidacy for president, she all but asked them for their votes.

“We have to win the White House with a constitutional conservative for president who is committed to America as the indispensable nation,” she told them. “I know we share those goals and that’s why you’re gathered here today, and I just want to encourage you: Keep fighting!”