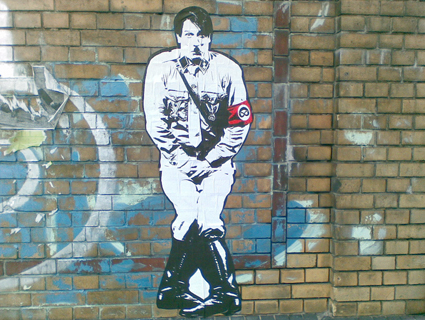 Giving you all the news you can use, the Telegraph of London filed this dispatch today:

Some tried bombs to neutralize the fuhrer, others tried bullets. All failed. Now it has come to light that British spies looked at an even more audacious way of derailing the man behind the German war machine—by giving him female sex hormones.

Agents planned to smuggle doses of oestrogen into his food to make him less aggressive and more like his docile younger sister Paula, who worked as a secretary.

Spies working for the British were close enough to Hitler to have access to his food, said Professor Brian Ford, who discovered the plot.

Ford, a professor at Cardiff University in Wales, says he uncovered the plot while working on his new book, Secret Weapons: Technology, Science, and the Race to Win World War II.

What exactly would “feminizing” Hitler have accomplished? Plenty, perhaps, in the eyes of modern conservatives, who’ve always tried to cast their political adversaries as girly-men who can’t keep the homeland safe. Rick Perry played that card just yesterday with the current US commander in chief.

But beyond the obvious “masculinity-equals-militarism” questions for gender-studies theorists, the Electric Hitler Kool-Aid Estrogen Test could reinforce the worst fears of right-wing conspiracy theorists who’ve long held that female hormones in our drinking water are de-nutting American society. (On a related note, our own Econundrums wiz, Kiera Butler, recently highlighted pro-life groups who believe that women should feel guilty about taking birth control because it ends up in rivers and “is making male fish, frogs and river otters less masculine.” Unsurprisingly, it turned out the pro-life groups were wrong.)

Sure, it takes an impressive ignorance of scientific evidence to believe in wacky estrogen conspiracy theories—and it takes a host of bigger issues for you to obsess over an allegedly impending sissy-fication of American society. But maybe some readers will find the scenario plausible. As the Telegraph suggests, what’s good for the frog was good for the fuhrer.