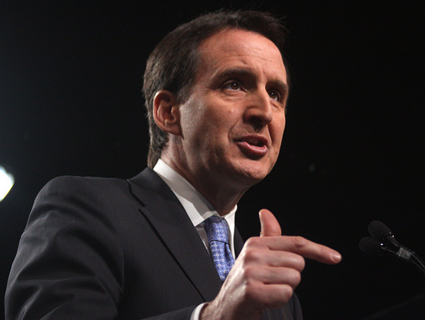 At midnight last night, Minnesota’s government officially shut down, save for essential services, after the Republican legislature and Democratic Governor Mark Dayton failed to reach an agreement on how to close the state’s $6.2-billion budget deficit (Republicans want more spending cuts; Dayton wants to raise taxes in some areas). So how did Minnesota end up with a $6.2 billion budget deficit? Two words: Tim Pawlenty.

As I explained yesterday, the GOP presidential candidate and former governor spent his eight years in St. Paul turning in balanced budgets by using various accounting tricks (deferred payments, declining to take into account inflation when calculating future expenses), and shifting resources (local property taxes skyrocketed in order to offset shrinking state revenues). It looked good on paper, provided you didn’t look too hard. But now, with Minnesota’s shutdown making headlines, Pawlenty is doing damage control. Last night, he held a brief press conference at the Minneapolis–St. Paul Airport to offer his thoughts on the shutdown. The kicker: He thinks it’s a good thing.

Former Governor and Presidential Candidate Tim Pawlenty says he wishes the brief shutdown he presided over in 2005 lasted longer.

He explains that had the shutdown continued the state might have been better off fiscally.

While Pawlenty refused to directly address the tens of thousands of state workers facing unemployment, he did suggest they should adopt longer term Republican goals based on fiscal responsibility.

This misses one key thing, which is that the actual shutdown itself has an economic impact. As Minnesota Public Radio reports, the shutdown could cost about $12 million per week in lost tourism revenue, $10 million in lost productivity, $2.3 million in lost lottery revenue, and a few million dollars more in lost productivity because workers were drawing up contingency plans for the shutdown rather than doing actual work. Beyond that, one direct consequence of laying off tens of thousands of state workers is that those people become unemployed, placing an even greater strain on the economy. Shutdowns are great if you’re primarily concerned with slowly shrinking the size of government with no larger concern for the state’s economic health—but that’s about it.