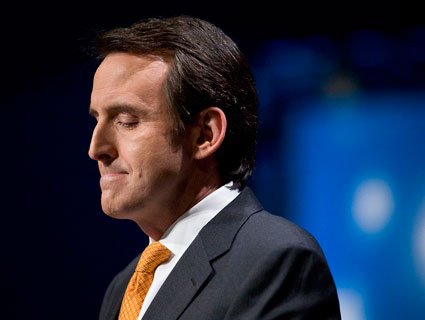 When GOP presidential candidate Tim Pawlenty presented his economic manifesto earlier this month, he delivered an unambiguous case against government interference in the economy.

“The tax code is littered with special interest handouts, carve-outs, subsidies, and loopholes,” Pawlenty said. “That should be eliminated…Business success should depend on winning over customers, not winning over Congressmen.” Government, according to Pawlenty, shouldn’t be in the business of picking winners and losers, and should instead allow the natural ebb and flow of capitalism to drive economic growth.

Yet Pawlenty’s signature jobs program during his eight years as Minnesota governor did the opposite. Between 2004 and 2009, his Department of Employment and Economic Development (DEED) handed out nearly $150 million in tax breaks in a mostly fruitless attempt to boost the economies of the state’s most depressed areas—an effort that some state lawmakers now want to undo.

The governor’s so-called Job Opportunity Building Zones (JOBZ) program offered major tax incentives to companies willing to relocate to poor, rural parts of the state. The stakes were high: From 2000 to 2003, Minnesota shed 38,000 manufacturing jobs, according to the state’s Department of Economic Security. By offering breaks on most taxes—income, property, state, and local—Pawlenty had hoped to stanch the loss of jobs to low-tax states like South Dakota. Companies that wanted to take part negotiated subsidy agreements with local governments and were required to set hiring targets before they could attain state approval.

For localities, these deals were a no-brainer. Because most of the lost tax revenues were destined for state coffers anyway, JOBZ was essentially a risk-free proposition for local officials. But there was also a catch: Since jobs were primarily being shifted from one part of the state to another, some localities ended up on the losing end.

JOBZ represented Pawlenty’s spin on enterprise zones, a concept that’s been kicked around in Republican circles since the heyday of Rep. Jack Kemp (R-N.Y.). Kemp’s vision—poor neighborhoods where taxes are lowered to attract businesses—failed to gain traction during his nearly two decades in Congress and term as secretary of the Department of Housing and Urban Development. “This is seen as a tax exemption that’s always been suspect,” says Larry Jacobs, a political science professor at the University of Minnesota (UM).

Greg LeRoy, executive director of Good Jobs First, a national grassroots organization that monitors businesses subsidies, says that even defenders of enterprise zones “admit that they don’t create new economic activity. They just move it around by encouraging companies to relocate in certain places deemed in need of help.”

Still, in 2003, Pawlenty dusted off the idea in a bid to resuscitate Minnesota’s ailing economy. “I am tired…of waking up and seeing another business moving to Sioux Falls,” Pawlenty said after introducing the plan. “It’s the mother of all economic development tools. It’s enterprise zones on steroids and we can bring thousands of jobs back to rural Minnesota.” Since 2004, Minnesota has granted some $144 million in JOBZ-related tax benefits to 379 companies.

By early 2008, however, it was clear that JOBZ was sputtering—and that Pawlenty had thrown millions of dollars in tax breaks after a risky experiment in economic redistribution. An evaluation by Minnesota’s Office of the Legislative Auditor that February found that 70 percent of JOBZ participants would have expanded to some extent without the program. The OLA also found more than 60 subsidy agreements that set a deadline for businesses to hire new employees but didn’t require them to maintain those positions for the duration of the program (which is slated to expire in 2015).

Meanwhile, local governments were given free rein to determine which companies could participate, allowing any business that met JOBZ’s less-than-exacting requirements to take part. The OLA also discovered a larger problem: The program’s subsidies hadn’t been targeted at the most impoverished areas, a problem that undermined the initiative’s raison d’être. Ultimately, the OLA lambasted DEED for accounting practices that misrepresented and, in many cases, exaggerated the number of jobs created by JOBZ.

Many of the program’s flaws originated with the subsidy deals with localities, says Laura Kalambokidis, a UM economics professor who coauthored a 2010 analysis of JOBZ’s impact on economic development. Early on, the program omitted restrictions on the caliber of job that would satisfy the hiring requirements. Until the law was changed, firms took full advantage, meeting JOBZ requirements by hiring workers for low-wage service jobs instead of creating better-paying ones. In their JOBZ subsidy agreements, companies also set low hiring targets that they could meet easily. “The goals that were laid out in these agreements were lowballed,” Kalambokidis says.

The lack of effective oversight made it virtually impossible to assess the program’s real impact. While businesses are required to report on their progress—and are subject to a potential “clawback” of their subsidy if they fall short—the reports are not audited by the state. Effectively, the hiring data is self-reported.

Most damning was the program’s lackluster job-creation record. An analysis by the Minneapolis Star Tribune in March found that since 2004, 77 companies had been ejected from JOBZ for not meeting hiring goals. Although those firms had been awarded some $7 million in tax breaks, they were forced to repay a paltry $285,000. In April, the Star Tribune reported that JOBZ subsidies spiked to $34 million in 2009 even as the number of jobs created by the subsidies sank by 9 percent.

According to a recent DEED report, JOBZ created around 6,500 jobs between 2004 and 2009. When the National Review recently crunched the numbers, it discovered that Minnesota’s job-growth rate under Pawlenty was 0.5 percent—the worst among the ex-governors vying for the GOP nomination.

At least one member of Pawlenty’s party is trying to undo his economic legacy. Republican state Rep. Linda Runbeck introduced legislation in late April seeking to repeal JOBZ. The program “picks and chooses companies and really rewards them grandly for just being in a location,” she told Finance and Commerce, a Minnesota publication. “Chasing businesses like we seem to be doing, and spending a lot of money to do so, is really antithetical to good, vibrant job creation.” Despite Runbeck’s efforts, the program still enjoys considerable support on both sides of the aisle. As a result, her measure—coauthored with two Democrats—never made it out of committee. (In an email, the legislative assistant for one of the Democratic lawmakers notes that the bill will have another chance in an upcoming special session.)

In the fledgling 2012 race, the economy has emerged as the number one issue among voters. And while Pawlenty has slammed Obama’s jobs record, his own history in this department may raise questions about the viability of his economic proposals—as may the contradiction between his current hands-off stance on the economy and past hands-on strategy. Says UM’s Jacobs, “Here’s a guy who’s now deploring tax exemptions, but it was certainly part of his jobs strategy.”