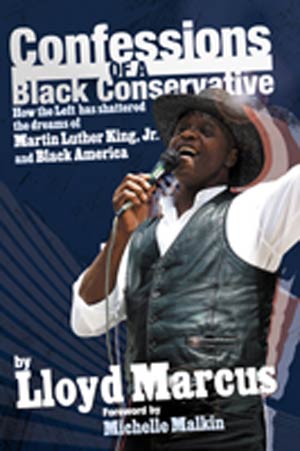 Last month I took note of the curious new genre of Tea Party-themed protest music. No musician, save for perhaps Ted Nugent, has capitalized on the conservative movement’s career-building potential as successfully as Lloyd Marcus—a self-identified “black unhyphenated-American” who has headlined dozens of Tea Party rallies across the country since last spring. His stage presence, like any successful artist’s, is distinctive: He sports a braided rat tail and performs in a black vest and cowboy hat. Marcus is currently touring the country with a handful of other Tea Party troubadours and conservative speakers as part of the Tea Party Express tour sponsored by Americans for Prosperity. I caught up with the singer at the tour’s first stop—in Harry Reid’s hometown of Searchlight, Nevada.

TM: Who would say are your biggest influences?

LM: Sammy Davis Junior, Kenny Rogers, Lionel Richie, Nat King Cole. [Laughs.] That’s a bizarre combination. But, like a lot of people have called me a combination of all three. Oh! And I like Michael Jackson.

LM: Ha-ha! A safe choice? Well the thing that fascinates me, the thing I loved about Michael and I loved about Sammy Davis Junior, too; both of them they had a magic, they had a magical gift that you were compelled to watch them. The moment that Sammy Davis Junior walked on stage, you felt the excitement in your stomach, you felt compelled to watch him. And Michael Jackson had that same magic.

TM: What inspired you to start writing these songs?

LM: I love my country and I saw it being taken over by an out-of-control administration. So I wrote the Tea Party Anthem about a year ago and it went national. I’m really offended by the Obama administration and the mainstream media, attempting to portray this as a racist movement. It is not. These are good, decent, hardworking Americans who couldn’t give a hoot about Obama’s skin color. There is racism going on in the country. But it’s not from the Tea Party; it’s from the left. They are using racism to try to shut us up.

TM: Following on that, Andrew Breitbart was on stage earlier talking about Congressman John Lewis and the epithets Lewis and others have said were thrown at them last weekend at the Capitol.

LM: I think that’s a lie. People have cameras and video everywhere. If that happened, we would see the video everywhere. We haven’t seen any kind of video or anything. I think it’s once again them attempting to use the race card to shut us up and make us look bad. It’s just another one of their disgusting tricks.

TM: Not to belabor the point, but why would you be so inclined to say that John Lewis is lying, given his history with the Civil Rights Movement? Shouldn’t he get the benefit of the doubt?

LM: Um, because he’s a liberal Democrat. Thank God for his service, but they are scumbag liars. Now ask me how I really feel! [Laughs.]

TM: You talk a lot about being a black Republican. Angela McGlowan [a conservative commentator running for Congress in Mississippi] was on stage earlier. But besides her, who do you see as emerging black Republican leaders, given that there aren’t any in Congress now?

LM: I don’t know. But I just heard that Star Parker is running for Congress. Oh! [Florida GOP congressional candidate] Colonel Allen West! He’s a rockstar! He rocked the house at CPAC. Have you seen his Youtube video? He’s fantastic. As a matter of fact he’d be wonderful in the White House. He’s gonna be a superstar. He is the emerging star.

TM: Why are there so few high-profile black Republicans?

LM: Because they’re making a racist choice by voting for Barack Obama because the Left has done an incredible job of selling them the lie that the Republican Party is the party of racist, rich white people.

TM: When did you become a conservative?

LM: When I was nine, my family moved to a brand-new government high-rise building [in Baltimore]. And within a couple years time I saw that building turn into one huge ghetto. And all the residents of that building were black. The elevator was broken half the time because of vandalism, and I had to walk up a dark, smelly, dangerous stairwell to get to our apartment. Everyone around me kept telling me it was the white man’s fault. I learned that you just can’t give people stuff.

LM: Well I love Sarah Palin, but it’s kind of too early to tell because that’s like a lifetime in politics. We don’t know who’s going to pop on the scene.

TM: I saw you have your own cover of “Sara Smile” by Hall & Oates. Governor Palin was here today, did you have the chance to serenade her?

TM: Do you think that’s in the cards?

LM: Well she’s going to join us again in Boston, so maybe if it’s not too much of a madhouse. Because let’s face it, today was a madhouse!

(Check out Marcus’ hits—and the rest of the American Tea Party Top 40 here.)