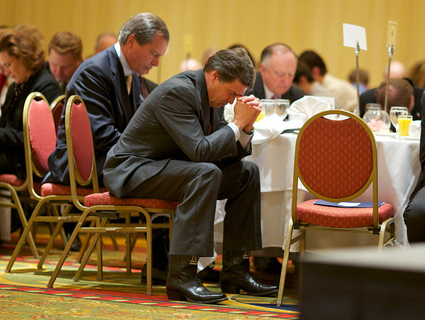 The Dallas Morning-News reports that Texas Governor Rick Perry is distancing himself from some of the participants and organizers of The Response, his August 4th prayer and fasting festival in Houston. As the likely GOP presidential candidate explained, “Just because you endorse me doesn’t mean I endorse everything that you say or do.”

That’s a pretty standard politician defense, and there’s usually a little bit of truth to it. But this kind of misses the point. Sure, the event’s organizers hold some wacky views (which we’ve written about here and here) but the larger point is that Perry is, by holding a rally at the organizers’ behest, is consciously aiding a religious movement that has a clear and consistent purpose to bring the “seven mountains”—family, religion, education, business, arts, media, and government—under the dominion of Christians. For the uninitiated, the Texas Observer‘s Forrest Wilder has a must-read piece on the New Apostolic Reformation—the religious movement behind The Response:

The movement’s top prophets and apostles believe they have a direct line to God. Through them, they say, He communicates specific instructions and warnings. When mankind fails to heed the prophecies, the results can be catastrophic: earthquakes in Japan, terrorist attacks in New York, and economic collapse. On the other hand, they believe their God-given decrees have ended mad cow disease in Germany and produced rain in drought-stricken Texas.

Their beliefs can tend toward the bizarre. Some consider Freemasonry a “demonic stronghold” tantamount to witchcraft. The Democratic Party, one prominent member believes, is controlled by Jezebel and three lesser demons. Some prophets even claim to have seen demons at public meetings. They’ve taken biblical literalism to an extreme. In Texas, they engage in elaborate ceremonies involving branding irons, plumb lines and stakes inscribed with biblical passages driven into the earth of every Texas county.

That’s a sampling. Perry, who has presented himself as a Moses figure leading Americans out of slavery at the hands of “Pharaoh” (i.e. big government), worked with movement leaders to plan The Response, and as Wilder explains, uses much of the same language when he talks about his goals. He’s not accountable for specific pastors’ views, on, say, Oprah (one participant believes she’s a forerunner to the Antichrist). But his involvement with the group goes much deeper than standard guilt by association.