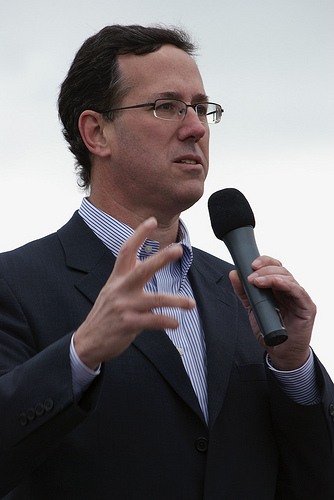 Like Tim Pawlenty and Newt Gingrich before him, former Pennsylvania senator Rick Santorum announced this morning on ABC’s Good Morning America that later today he’ll officially announce his presidential candidacy in the rural Pennsylvania town where his immigrant grandfather once worked.

Santorum is arguably the most hard-line, far-right social conservative in the GOP presidential field, neck and neck with Rep. Michele Bachmann (R-Minn.), who’s expected to jump into the race later this month. (That right-wing intransigence has earned Santorum a serious Google problem.) But on GMA, Santorum sought to burnish his right-wing fiscal credibility, too, saying Rep. Paul Ryan’s unpopular budget plan doesn’t cut deep enough. “Not even Paul Ryan and his budget now has the temerity to go after Social Security,” Santorum said.

Ryan’s plan, which claims to slash $4 trillion over the next decade, has become a political lightning rod. In the recent special election in New York’s 26th district, Democrats used the Ryan plan as a political bludgeon, bashing the Republican candidate Jane Corwin for calling it “a terrific first step.” An early favorite, Corwin went on to lose to Democrat Kathy Hochul. According to a June poll from CNN, just 35 percent of respondents said they backed Ryan’s plan, while 58 percent opposed it. Even among conservatives, 53 percent of respondents said they disagreed with Ryan’s plan. In a matter of months, the plan has become too politically toxic to touch—a dilemma that pollsters had warned of in early discussions with GOP lawmakers.

As it stands, Santorum’s presidential bid is a long-shot, Hail Mary pass for a politician once described by a former aide as a “a Catholic missionary who happens to be in the Senate.” By embracing both far-right social and economic policies, Santorum is only steering his campaign farther into the margin—and away from any chance, however slim, of succeeding in the presidential race.