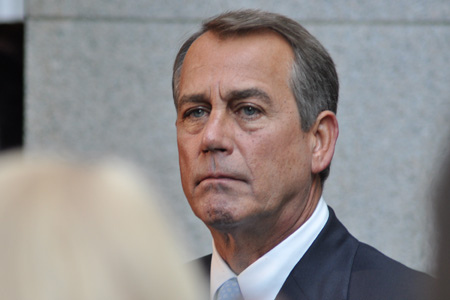 House Speaker John Boehner’s rejiggered deficit reduction bill is set for a vote on the House floor Thursday evening. The speaker suffered a minor setback earlier this week when the Congressional Budget Office said his original bill would save only $850 billion over ten years, not the $1 trillion in cuts he’d hoped for. What remains to be seen is whether Boehner’s new bill, expected to cut $917 billion, will win enough GOP votes in the House to pass. At the start of the week, more conservative House GOPers had come out in opposition to the bill, but GOP leaders say they’re getting to whipping together enough votes within their caucus.

But here’s a bigger question no one seems to be asking: Is John Boehner’s bill a waste of time?

All 51 Senate Democrats and independents Bernie Sanders of Vermont and Joe Lieberman of Connecticut say they will vote against Boehner’s bill if and when it moves to the Senate. (So, for that matter, have a handful of hard-line Senate Republicans, but for a very different reason.) And earlier this week, the White House threatened to veto Boehner’s bill should it somehow land on President Obama’s desk. On Thursday, Press Secretary Jay Carney called the bill “a political act that has no life beyond its existence in the House.” In short, the bill has almost zero chance of ever becoming law.

There’s perhaps an argument to be made that by putting his own bill out there, Boehner has more of a shot at getting pieces of it into a possible final compromise bill with Democrats. That would presumably take place during the reconciliation process. But as Greg Sargent at the Washington Post explained, Senate Majority Leader Harry Reid and Co. have no intention of drawing on the substance of Boehner’s bill:

Senate Dem aides say they would then use Boehner’s bill—which passed the House but died in the Senate—to expedidate their own proposal. Here’s how. They would use the “shell” of the Boehner bill as a vehicle to pass Harry Reid’s proposal, because for various procedural reasons House messages get expedited consideration. Senate Dems would vote to “amend” Boehner’s bill by replacing it completely with Reid’s proposal—which the Senate could then pass more quickly than they otherwise could.

After that, Reid’s proposal—having passed the Senate—would then get kicked back to the House. Having proved that Boehner’s plan can’t pass the Senate, Democrats would in effect be giving House Republicans a choice: Either pass the Reid proposal, or take the blame for default and the economic calamity that ensues.

Setting aside the political posturing and gamesmanship, it’s hard to see how Boehner’s bill is anything but a waste of precious time. Remember: The Aug. 2 deadline is only six days away.