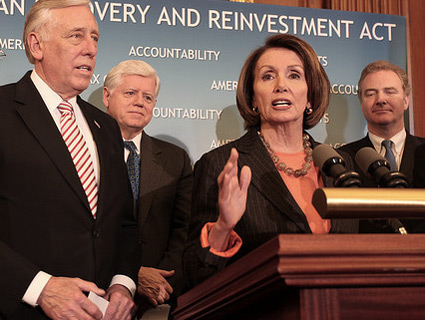 In a fiery press conference on Friday, after House Speaker John Boehner (R-Ohio) abandoned debt ceiling negotiations with the White House, President Obama vented his frustration at top Republicans in Congress. “I’ve been left at the altar now a couple of times,” he quipped. But if that’s the case, then the most vocal defenders of America’s middle and working classes, to borrow Obama’s metaphor, weren’t even invited to the wedding.

Largely missing from the closed-door negotiations and deal-trading in Washington’s acrimonious debt ceiling battle are Congress’ progressive stalwarts, the left-of-center lawmakers who fight for middle- and low-income individuals and families. That includes the House Progressive Caucus and a few dozen members of the Senate. The debt ceiling debate has left many of these lawmakers outraged at the White House for keeping them at arm’s length and out of loop.

And make no mistake: After being frozen out of the process, their “yes” votes for a final compromise deal are no guarantee. “If the White House is assuming we will just go along,” says Rep. Raul Grijalva (D-Ariz.), the co-chair of the progressive caucus, “they are mistaken.”

So constricted is the flow of information on the talks that Rep. Jerrold Nadler (D-N.Y.) tells Mother Jones his debt ceiling news was coming “mostly from the pages of the Washington Post.” Similarly, Grijalva says of the debt fight, “When we hear things…it’s what we read and hear in the news.” Take the issue of cuts to the entitlement programs Social Security, Medicare, and Medicaid. For months Grijalva and other Democrats have battled to block any attempt to whittle away at entitlements as part of a deficit deal. Yet Obama’s last offer to the GOP included as much as $650 billion in entitlement cuts. This, Grijalva says, illustrates the disconnect between progressives and the White House in the debt fight. “Those [entitlement cuts] are all things that we would’ve told the White House we can’t support,” he says. “But that discussion is something we haven’t been able to do.”

The frustration among Democrats at the of communication from the White House boiled over in a meeting between Senate Democrats and White House budget director Jack Lew last week, when Sen. Dianne Feinstein (D-Calif.) lit into Lew for the administration’s failure to consult congressional Democrats on a potential agreement to slash the deficit. Feinstein admitted she lost her cool in the meeting, but told MSNBC that she’d never seen fellow Democratic members so flummoxed. “I like to know what I’m doing, and I can’t get any information and it’s very frustrating,” she said.

What worries progressives in Congress is that party leaders will thrust a deal in their faces at the last minute with little time for changes or debate. “At the end of the day, the leadership will come up with something,” says Rep. Adam Schiff (D-Calif.). “It’s possible we’ll just be presented with a take-it-or-leave-it scenario.”

But if that happens, Grijalva says, don’t expect liberals and progressives to blindly support the plan. For instance, the Arizona congressman has expressed serious misgivings about Senate Majority Leader Harry Reid’s bill, which calls for $2.7 trillion in defense and non-defense spending over the next decade and raises the debt ceiling through the 2012 election season. Reid’s legislation includes no new revenue from tax increases—an option Grijalva wants—but does not initially touch Social Security, Medicare, and Medicaid. And while it remains to be seen exactly which domestic programs Reid’s plan would cut, Grijalva insists that Democrats will not vote “yes” simply for the sake of a deal.

Given the political landscape in Congress, House Democrats could end up wielding a significant amount of influence in the passage of a deficit reduction bill. Hard-right House members said Tuesday that they do not support Majority Leader John Boehner’s deficit plan, which would raise the debt ceiling in two steps, with the Republican Study Committee saying it was not “a real solution.” Complicating the outcome of any deal even more are the 39 GOP House members who pledged to vote only for a bill that aligns the Cut, Cap, and Balance Act’s provisions. So there’s a possibility Boehner’s plan won’t find enough GOP votes in the House.

If and when a compromise deal emerges, melding Boehner’s and Reid’s plans—the two aren’t that far apart—Boehner could end up needing the support of Democrats to win passage in the House, with many fiscal conservatives and tea party-affiliated lawmakers opposing any debt ceiling increase at all. “Boehner will have to go the Democratic caucus,” Ellison says, “or else he’ll be the speaker who went down in history as having screwed the country.”