Senate Democrats are ramping up their efforts to make oil subsidies a big issue—and an inconvenient one for Republicans. With the debate about the debt ceiling revving up, they want to make an issue of the $21 billion worth of tax breaks that they’ve proposed cutting.

Democrats on Tuesday released a bill that would slash those subsidies. Today, they’re holding a press conference at an ExxonMobil station on Capitol Hill to drive home the point. Via The Hill:

All the savings would be steered toward deficit reduction, which Democrats made their top talking point as they baited GOP foes on nixing the incentives.

“If you are serious about deficit reduction and you say Big Oil’s tax breaks are off limits, how serious can you be?” said Sen. Charles Schumer (N.Y.), a key strategist for Senate Democrats.

Democratic Sens. Claire McCaskill (Mo.), Sherrod Brown (Ohio), Jon Tester (Mont.), and Robert Menendez (N.J.) are also lead sponsors of the bill—and the former three are looking at difficult reelection bids in 2012. But that’s sort of the point of this whole maneuver. Subsidy reform isn’t likely to pass the Senate, let alone the House. But they are banking on Americans being annoyed at both the debt and high gas prices, and being able to use that as a campaign weapon.

Speaking of cashing in on populist revolt against Big Oil, the Center for American Progress took a look at how little ExxonMobil currently pays in taxes, thanks in large part to these loopholes. Here’s what it looks like: 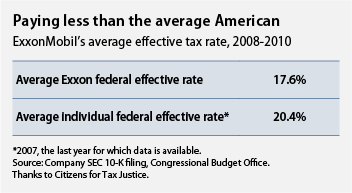