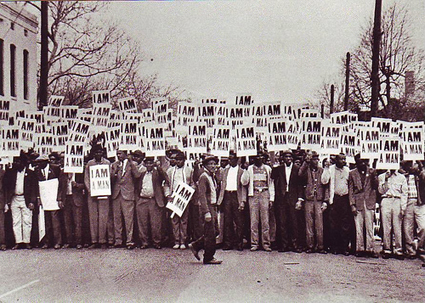 Organizers report thousands of other protests, teach-ins, and rallies were held nationwide. The rallies were in response to 729 collective bargaining-related bills sitting in 48 statehouses around the country. The National Conference of State Legislatures has created a database listing each bill and its (somewhat) current status. For a round-up of state labor battles, check out Matt Hrodey’s post at the Milwaukee News Buzz.

In Ohio, collecting recall signatures is far from over. Last week, the state passed a collective bargaining bill that baned public sector striking; eliminated binding arbitration; and restricted collective bargaining. Labor organizers have galvanized efforts to put a referendum vote on the November ballot before the June 30 deadline.

On Wednesday, Florida teachers, police and firefighters packed the state Chamber of Commerce, irrate that they were used in this anti-union TV ad produced by the chamber:

In Maine, the Department of Labor has stepped into the battle over Governor Paul LePage’s decision to remove a mural depicting the state’s labor history from the Augusta Department of Labor building. The DOL says that mural was sponosred by the federal government and Maine has to either replace the mural or return the money, which was $60,000 at the time of the mural’s inception. You can see the murals, created by Judy Taylor, on her personal website.

For a little piece of this week’s labor history, listen to the stories of Memphis sanitation workers striking for collective bargaining rights. Monday, April 4th, was the 43rd anniversary of MLK Jr’s assassination, the day before he was to march with the sanitation workers.