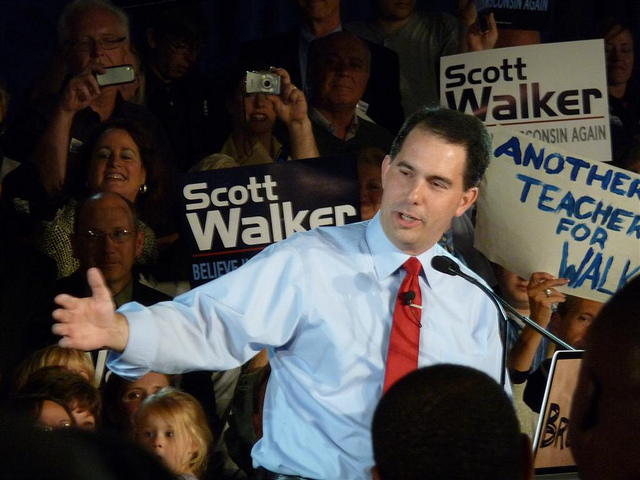 The order comes after Dane County District Attorney Ismael Ozanne sued the state, alleging that state Senate Republicans violated open records law when they hastily convened a special committee on March 9 to vote on a rewritten version of Walker’s bill. The judge, Maryann Sumi, said the restraining order will remain in place until she rules on whether lawmakers in fact violated state law, as Ozanne claims.

Judging by Sumi’s comments at today’s hearing, there’s a strong chance Ozanne, the district attorney, could win his case and overturn the law. “It seems to me the public policy behind effective enforcement of the open meeting law is so strong that it does outweigh the interest, at least at this time, which may exist in favor of sustaining the validity of the (law),” she said, according to the Milwaukee Journal-Sentinel.

Sumi’s order is a brief victory for the unions, progressive groups, and protesters who flooded the streets of Madison over the past month in opposition to Walker’s bill, which would, among things, eliminate collective bargaining rights for most public-sector unions in Wisconsin. Ozanne’s suit challenging the bill’s legitimacy is one of several, with Dane County Executive Kathleen Falk also challenging the legality of the bill, alleging Senate Republicans did not have the necessary quorum to pass the bill. Falk’s suit is pending.