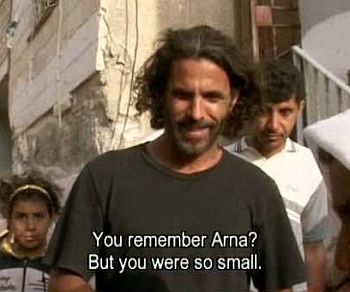 Jewish-Palestinian peace activist Juliano Mer Khamis was shot to death on Monday in the West Bank refugee camp of Jenin, near the steps of the theater program he helped found. Condolence messages from Palestinians and Israelis are pouring in, and the Palestinian Authority has arrested a suspect. The Jenin mayor saluted Juliano as someone who lived in the camp through “sweet and bitter days” and developed the theater program to reject oppression, injustice, and occupation.

In lieu of a tribute to this hero I’ve never met, I’d like to encourage readers to watch the 2004 film, Arna’s Children, which Juliano narrated and directed. I’ve watched many Israeli-Palestinian documentaries. None have haunted and moved me like this one.

The film, shot over almost two decades, is set in the Palestinian refugee camp of Jenin, a place where Israeli bombs and tanks are inescapable realities of childhood. In the first half of the film, we are introduced to Juliano’s mother, Arna, a Jewish Israeli who set up the theater group in Jenin in the late 1980s. Arna is bald from chemotherapy, yet devotes her dying days to her playful and talented little actors, helping them express their anger and grief through art and drama.

And many of “Arna’s children” have now become militiamen and suicide fighters.

In the second half of the film, Juliano returns to Jenin to find out how and why this has happened. We see that it’s not mainly about anti-Semitic brainwashing—Jenin residents adore Arna and Juliano despite their Jewish background and Israeli nationality. Rather, Arna’s children have chosen “martyrdom” because of the searing horrors they’ve witnessed with their own eyes.

One of the many unforgettable stories is that of Yousef, who had been the “joker” of Juliano’s theater group. At age 22, Yousef attempts to rescue a 10-year-old girl who was hit by an Israeli tank shell; the girl dies in his arms on the way to the hospital. One week later, Yousef finds he has nothing left to laugh about. He and another theater group alum open fire on Israeli civilians, killing four women before Israeli police shoot them dead.

Juliano himself is now another tragedy of the conflict. I hope more Israelis, Palestinians, and Americans will watch his film, reflect critically on its message, and work to end this cruel bloodbath once and for all.