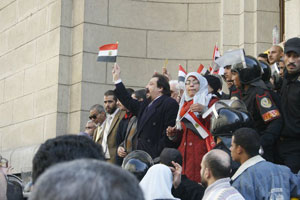 As pro-democracy protests erupt across Egypt and threaten to end the 30-year rule of President Hosni Mubarak, two Israeli women are following the news with particularly personal zeal: After all, they participated in this week’s demonstrations against the autocrat.

Hagar Sheizaf and Bar Rose were touring Egypt on their way to “see some mummies” at the Egyptian Museum when the first protests broke out. As they joined the ever-growing crowd—and later fled in terror from rubber bullets and water cannons— they felt “envy” for the courage, diversity, and unity they witnessed.

“For me, it was one of the scariest moments of my life,” Sheizaf, 20, said in a phone interview from Israel, where she and Rose returned on Thursday. “But I felt very, very proud—if I may feel proud for the Egyptian people….It’s so courageous to stand up like this. I can only hope that, in Israel, people will do the same one day.” (Sheizaf and Rose are Palestinian solidarity activists.)

Israel signed a peace treaty with Egypt in 1979, and President Hosni Mubarak has collaborated closely with Israel and the United States on security issues. However, sympathy for the Palestinians, and rage at Israel’s 43-year occupation of the Palestinian territories, runs deep in Egypt. The Israeli Ministry of Foreign Affairs issues frequent travel warnings that militant Islamists seek to kidnap Israeli tourists in the Sinai peninsula.

Many Israelis would consequently think Sheizaf and Rose were reckless to go to Egypt in the first place—and especially to share their Israeli nationality with the demonstrators. Yet Sheizaf and Rose dismiss these fears. Rose says, “We just said to people, ‘Ok, so we are Israelis. We are from the people and our government is not representing our personal opinions.'”

One conversation about Israeli politics with three Egyptian medical students left a particularly strong impression on Sheizaf. The medical students earned about 300 Egyptian pounds per month ($51), and came to the demonstrations to protest the economic crisis and Mubarak’s repressive government. When the students asked about democracy in Israel, Sheizaf told them about the Israeli parliament’s decision to investigate the funding sources of Israeli human rights organizations—to which one of the students replied, “‘Ah, Lieberman’s law!'” (Avigdor Lieberman, the Israeli foreign minister, is the main backer of the legislation.)

“I was really surprised that they actually know and read about the situation in Israel, and that they know the names of our politicians,” Sheizaf recalls. “My experience of telling people I’m from Israel was very positive…I told lots of people I’m Israeli. I didn’t get one negative response.”

Since returning to Israel, Sheizaf and Rose have fretted about the safety of their Egyptian friends, co-authored a 972 Magazine article about their experiences in Egypt, and fielded skeptical questions from the Israeli media. A journalist from Israeli Army Radio opened her interview with Rose by stating matter-of-factly that it’s hard to be an Israeli in Egypt.

“I just answered her that it’s hard to be a human being in these demonstrations, regardless of your nationality,” Rose says. “I felt real solidarity with the Egyptian people, and [the Israeli Army radio reporter] described it like I should be scared of them.”