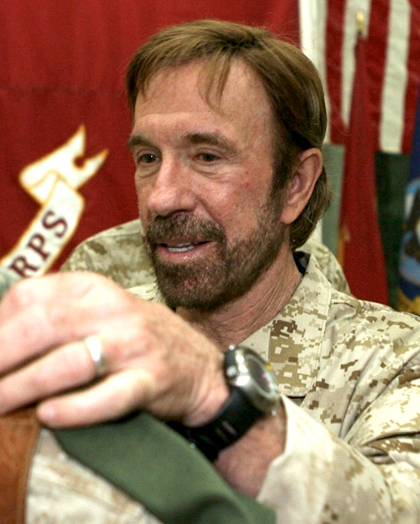 Happy Holy Week! This year, Walker Texas Ranger star and Internet meme Chuck Norris is celebrating things a little differently—by writing a special week-long series at WorldNetDaily on the dangers of creeping Islamic Sharia law in American society. Norris, who wants to make clear that he is absolutely not an Islamophobe, warns that “where Muslim religion and culture has spread, Shariah law has shortly followed”:

Of course, many Americans watch on video a Middle Eastern woman allegedly caught in adultery, buried in the ground up to her head and being stoned to death, and think, “That could never happen in America.” But they fail to see how Shariah law has already been enabled and subtly invoked in our country, and that any such induction like it is brought about by understated lukewarm changes, like a frog boiled in a kettle by a slow simmer.

As proof of the slow boiling of the American frog, Norris cites three examples: A Florida judge ordering two Muslim parties to settle their dispute through Islamic arbitration, per the terms of their mutually agreed-upon contract; the push by various state legislators to ban Islamic law from state courts; and an Obama adviser telling a British audience that Sharia has been “oversimplified.” And that’s just in the last few months! Of course, each of these points has its self-refuting flaws. Judges turn cases over to pre-selected religious arbitrators all the time, for instance, and not just for Muslims. None of the state legislators in question have produced a single example of Sharia being forced upon their states. And as for the argument that Sharia has been “oversimplified,” I would just point you to the fact that a quasi-mulleted martial arts actor from the mid 1990s feels qualified to explain to a national audience what Sharia is.

Read the full piece here. Norris promises four more articles this week on Sharia (and yes, because it’s the Internet, one of those columns will appear in the form of a top-ten list). While you wait patiently for part two, Norris recommends that you read David Gaubatz’s novel expose Muslim Mafia, in which he exposes the Muslim Brotherhood’s attempt to infiltrate Capitol Hill with interns.

Anyway, this is part of a trend for Norris: In 2009, he challenged President Obama to produce his birth certificate—promising that if he did, the entire birther controversy would “fade away like the pains of childbirth”; he also warned that the Copenhagen Climate Conference was merely an excuse to bring the globe closer to a “one world order.” That prophesy came two years after he single-handedly disproved the theory of evolution.