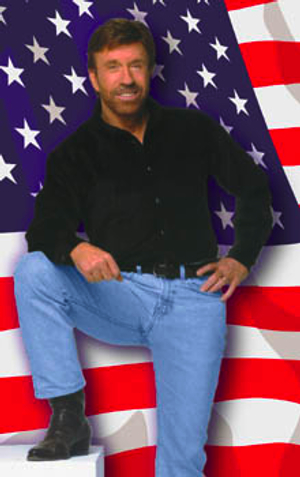 Chuck Norris is worried about climate change. Not the environmental effects caused by rising temperatures—that phenomenon, he thinks, is a “con game.” No, he’s worried that Obama and other world leaders are using global warming as an excuse to create “a one world order” when they meet in Copenhagen next week.

That’s what Norris argued on a recent appearance on Fox News’ Your World with Neil Cavuto, warning that if the US signs on to a successor to the Kyoto Protocol, “Our country as we know it now will no longer exist.”

In his Townhall.com column, Norris has also called attention to the phrases in draft versions of the negotiating text indicating that climate negotiations are a stealth attempt to create a unified world government:

Phrases such as “creation of new levels of cooperation,” “a shift in global investment patterns,” “adjust global economic growth patterns,” “integrated system of financial and technology transfer mechanisms,” “new agreed post-2012 institutional arrangement and legal framework,” “new institutional arrangement will provide technical and financial support for developing countries,” “global fund,” etc., are messages that make one wonder how far this political body’s arm would reach into our country and force our hands into others.

All this leads Norris to the inevitable conclusion: “Now, if that isn’t one powerful intergovernmental or global-governmental group overseeing and manipulating America’s and others’ economic and political conditions, I don’t know what is.”

Video below the jump: