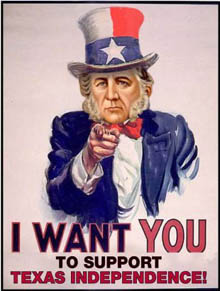 As with any half-decent declaration of independence, the group’s resolution has a list of grievances: Specifically, the federal government has failed the protect its borders, and “implemented thousands of laws, mandates and agencies in violation of the United States Constitution that have invaded the sovereignty of the State of Texas.”

But wait: This story actually gets stranger. As the Houston Press reported, the Texas Nationalist Movement’s secession rally is being sponsored by none other than state Rep. Leo Berman. You may remember Berman as the man who introduced a bill to force the President of the United States to prove his citizenship (again), and, when asked for proof, cited YouTube videos he’d seen because, “YouTubes are infallible.” He’s also sponsoring a bill to save state courts from the scourge of Islamic Sharia law.

So why is a state legislator promoting a secession rally? The Press caught up with Berman, who explained that while he “very strongly” does not support secession (statehouse rallies need a legislative sponsor), he doesn’t think it’s such a terrible idea either:

He says he has “no qualms” about supporting a secession rally. Is there any group out there whose message is so far out, so radical and dangerous that he would refuse to be a legislative sponsor for them?

“I’m very, very, very strongly pro-life,” he says. “So I would not support an abortion-type rally.”

Man’s got to stand for something.

Support for secession has a long and rich history in the Lone Star State. According to a 2009 poll, 48 percent of Texas Republicans agreed that the state “would be better off as an independent nation.” That came after GOP Governor Rick Perry told reporters at a tea party in Austin that if the federal government didn’t change its ways, secession might be an option. And in 2009, a Kerr County resident was arrested for claiming to be a sheriff’s deputy for the “Republic of Texas.” For more, check out our interactive map on US secession movements.

Also of note: Although the group’s poster features a severely mutton-chopped Sam Houston calling for Texas independence, the real Sam Houston famously took an unpopular stand against Texas secession on the eve of the Civil War. As he put it: “The Union is worth more than Mr. Lincoln. I was denounced then. I am denounced now. Be it so!”