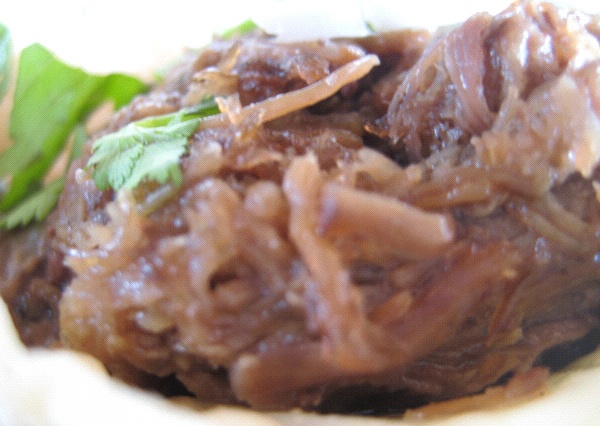 Here’s the Beef: Barbacoa is Spanish for “food coma” (Photo: Tim Murphy). Our guide in San Antonio was a geography student with an affinity for roller derby,* high school football, and Mexican Coca Cola (the kind that comes with sugar instead of high-fructose corn syrup). Oh, and Texas secession.

“We probably talk about Texas forming its own country more than we talk about Barack Obama,” she confided, speaking for her friends. No kidding; later on, as she showed us around San Pedro Park, she pointed to an old brick structure and noted, “This building’s been around since before the United States was part of Texas.”

Rachel’s case for secession wouldn’t find much common ground with Rick Perry, though; to her, breaking away would only be the mildly humorous first step. All 50 states should break apart, and then keep on subdividing from there, into counties, and then towns, and then small, walkable, autonomous communities where everyone knows everyone and no one would ever, ever, think of building a WalMart. There’s something of a small-government streak there, but mostly it’s just fiercely anti-corporate (Mexican Coca Cola notwithstanding), in a way that reminded me of the folks who want to restore Vermont’s independence so that they can ban chains and eat nothing but locally grown produce.

*A fun fact: To compete in a formal roller derby league, you first need to come up with a nickname and then have it approved by the association. For instance: “AC Slay-her,” “Abraham Drinkin’,” “A Kate 47,” “Admiral Jackbar,” and “Ammo-Zon”—and those are all just the letter “A.” Check out the full list here.