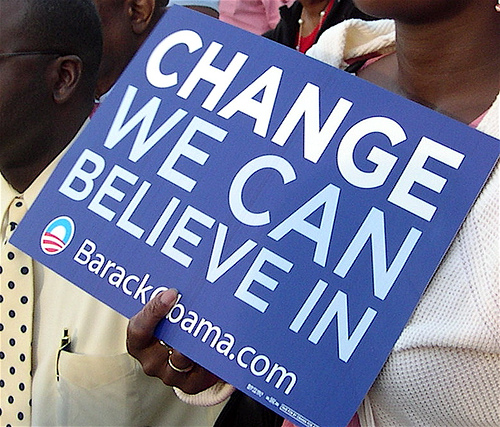 With conservative heavyweights planning to spend lavishly to topple President Obama—the White House anticipates $500 million or more in outside spending—the biggest challenge facing Obama aides and the Democratic Party is amassing a campaign war chest large enough to fight back against the Koch brothers, the Chamber of Commerce, Karl Rove’s Crossroads groups, and so on.

The Wall Street Journal today has an in-depth look at the Obama team’s early courting of donors in cities such as Boston, Dallas, Los Angeles, and New York. The “strategy briefings” by Obama aides, featuring the requisite PowerPoint presentation branded with the “Change the Matters” slogan, emphasizes the president’s “clear but narrowed support” in blue-collar, Midwestern states, but points out the stiff challenge facing Obama from deep-pocketed donors on the right. More from the WSJ:

The president’s political aides, people at the meetings said, are trying to establish stronger ties to some of these donors as they navigate what may be a difficult fund-raising environment.

Part of Mr. Messina’s presentation is to caution donors that while Mr. Obama has recovered after the trouncing his party took in the 2010 elections and is well-positioned for 2012, he will face a tough re-election fight that will require substantial donor support, according to people familiar with the presentation…

When he discussed the emerging GOP field in Miami, Mr. Messina made no mention of former Gov. Tim Pawlenty of Minnesota, participants said, even though Mr. Pawlenty has clearly been taking steps to build a White House campaign.

But Mr. Messina did talk about what Obama aides see as likely vulnerabilities for Jon Huntsman, the president’s outgoing ambassador to China, who is leaving his post to consider a campaign against his boss. The focus on Mr. Huntsman suggests Democrats see a threat in the former Utah governor, considered a moderate among potential GOP candidates…

Mr. Messina’s pitch to donors stresses the need to build a network in states of small business owners and religious leaders, particularly among Latino and African-American voters. His overall message, according to a Florida donor, was, “We’re in good shape, and we want to reconnect with you.”