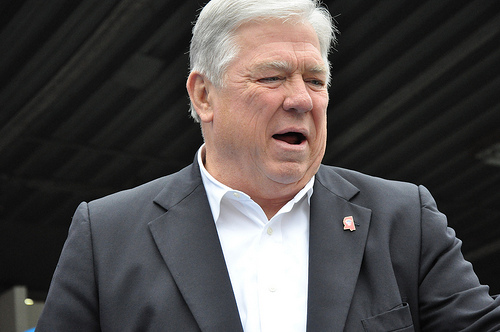 None of the Republican Party’s potential 2012 presidential candidates can match the fat Rolodex and fundraising prowess of Mississippi governor Haley Barbour. A former Republican National Committee chairman, Barbour enjoys deep ties in the party infrastructure. A former lobbyist who started his own DC firm, Barbour Griffith & Rogers (now BGR Group), Barbour can call up his K Street buddies to raise cash for his campaign war chest. And a former chairman of the Republican Governors Association, Barbour has friends in statehouses from Arizona to Maine who can marshal national support.

Now, as the Center for Public Integrity’s Peter Stone writes, Barbour is mobilizing those connections to raise big bucks and lay the foundation for a 2012 presidential run. A small cadre of Babour backers have, in recent months, briefed the governor on the deadlines and process for launching a White House bid, Stone writes, while also wooing GOP contacts around the country and building a base of potential Barbour backers in the GOP. That cadre includes lobbyists, former RNC director Ed Gillespie, pollster Ed Goeas, and a handful of other well-connected politicos. “Haley is reaching out to finance teams, political operatives, and policy experts across the country, emphasizing early states and right-of-center leaders,” one of those politicos, Scott Reed, a former RNC executive director, told Stone.

A look back at Barbour’s success in drumming up cash for the Republicans shows how powerful he could be in the 2012 presidential race, says Stone:

Barbour’s legendary fundraising prowess was demonstrated again in the last election cycle when he chaired the Republican Governors Association and helped corral a record-setting $115 million. The RGA, a 527 committee that can take unlimited donations, received seven-figure checks from such giants as Koch Industries, News Corp., the Las Vegas Sands and others, according to the independent Center for Responsive Politics.

The RGA’s record haul was instrumental in winning a net gain of six GOP governors and mounting a huge get-out-the-vote effort that helped federal candidates too, earning Barbour lots of political chits that he could call in if he runs.

“Barbour has a tremendous base of people who can raise $25,000, $50,000 and $75,000,” adds one top GOP fundraiser who spoke on the condition of anonymity because he is helping another potential candidate. “He recruited them into the RGA. That’s an important category of fundraising.”

Barbour’s cozy relationship with the moneyed elites of Washington comes with risks, of course. Electing an ex-lobbyist to the White House would amount to the ultimate instance of the Washington’s revolving door culture, and there’s some doubt whether Americans would elect a K Street veteran to run the country:

“The scarlet letter L that is attached to high profile lobbyists will be a challenge for a potential campaign and a net negative with the public,” predicted Sheila Krumholz, the executive director of the nonpartisan Center for Responsive Politics.

When Barbour became governor in 2004, he promised that his lobbying career was behind him and that he had put all his assets in a blind trust to avoid conflicts of interest. But media accounts have since disclosed that Barbour’s assets include 50,000 shares in Interpublic Group, which purchased his old lobbying firm in 1999—before Barbour left.

Documents filed with the Mississippi Ethics Commission peg the market value of that blind trust at $3.3 million and indicate that Barbour gets periodic payments from it. Documents from its initial 2004 filing indicate that the trust takes care of Barbour’s stake in BGR “profit sharing” and pension plans.

In recent years, BGR has witnessed a boom in work representing high paying foreign governments, political figures and businesses, some of which have unsavory or controversial reputations. For instance, BGR’s foreign clients have included: the Eritrean government, which has been allegedly linked to terrorism and human rights abuses; Iraqi opposition leader Ayad Alawi, who was trying to oust Iraqi Prime Minister Nuri al-Maliki; and the government of Kazakhstan, which has been ruled for almost two decades by strongman Nursultan Nazarbayev and has a poor record on human rights.

With Barbour almost surely eyeing the presidency in 2012, it’s well worth reading Stone’s article in full.