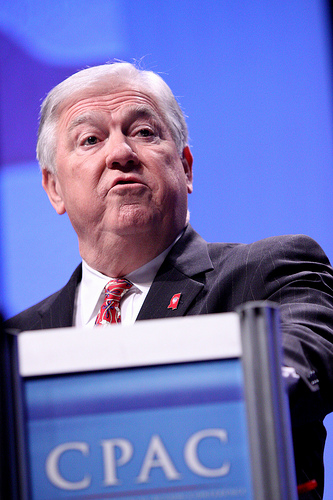 Most of the GOP’s likely 2012 presidential contenders are staking out hawkish positions on the conflict in Libya, supporting military intervention like a no-fly zone and criticizing President Obama for not acting fast enough to prevent violence in the north African country. But one Republican weighing a presidential run, Mississippi Governor Haley Barbour, appears to be siding with Obama on the thorny issue of what to do about Libya.

In a Tuesday speech in which he ripped Obama’s economic policies, Barbour also advocated for a more realistic, less reactionary response to the bloody crisis in Libya, where the military forces of Libyan dictator Muammar Qaddafi are violently quelling a popular uprising: “I think we need to be cautious about being quick on the trigger.” Barbour went on:

“The idea of nation-building, in my opinion, is something we need to be very, very, very careful about. I don’t think it’s our mission to make Libya look like Luxembourg…At the end of the day, we might have some role in Libya but it should not be to send American troops in there and knock heads and make Libya what we would like Libya to look like. Because it, no offense, is not ever going to look like what we’d like it.”

For those of you keeping track, that’s a noticeable break from Barbour’s fellow GOP presidential hopefuls, who seem all too eager for America to swoop into Libya—and probably plenty of other countries, too—to save the day. The question is, will Barbour’s foreign policy stance help or hurt him among increasingly polarized conservative voters?