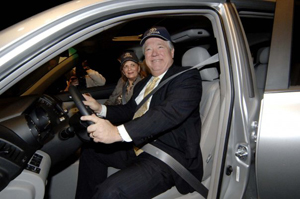 In the first presidential race post-Citizens United, what will candidates do to catch the wave of corporate cash? Here’s a good indication, from The Fix:

Dyke’s deep connections in South Carolina politics should be a boon for Barbour, but his more recent place of employment might be more relevant: Dyke’s a co-founder (along with Karl Rove) and until this week, secretary of American Crossroads, the shadowy conservative soft-money group that, along with its partner Crossroads GPS, funneled unprecedented levels of corporate cash into the 2010 midterms. As we told you this morning, American Crossroads has even bigger plans in 2012.

Dyke won’t be holding onto his old job when he joins Haley’s PAC—Crossroads spokesman Jonathan Collegio explained via e-mail that Dyke “will not attend any board meetings, be involved in any decision making or receive any correspondence from AC durings his absence.” (Update: In case I wasn’t clear, Collegio writes that Barbour has “taken a leave of absence” from the Crossroads board). But he should be able to help Barbour, who’s already something of a fundraising machine, tap into an even deeper network of corporate donors. It’s also not the first Crossroads co-founder Barbour has courted; as MoJo‘s Andy Kroll reported last month, the Mississippi governor has already wooed former RNC-chair Ed Gillespie. Collegio said Crossroads “has made no plans” about whether to spend any of its expected $120 million on the presidential primary.

American Crossroads isn’t the only connection between Dyke and Rove, though. As Richard L. Hasen reported back in 2007, Dyke played a formative role in one of the bigger scandals of the Bush administration—the trumped-up investigation into voter fraud that served as the basis for the US Attorneys scandal.

Dyke was a co-founder of the American Center for Voting Rights, an organization billed as “non-partisan,” but created at the behest of then-Bush aide Karl Rove in 2005. Just one month after it registered a domain name, it was the only voting rights group invited to testify at a hearing on voter fraud during the 2004 election. ACVR released a report (pdf) alleging that, among other things, an NAACP worker “paid crack cocaine in exchange for a large number of fraudulent voter registration cards in [the] names of Dick Tracy, Mary Poppins and other fictional characters.” Taking on future right-wing pincushions like ACORN, the report and the subsequent testimony by ACVR counsel Mark “Thor” Hearne made the case that voter fraud by Democratic operatives posed a serious threat to fair elections. The only way to fix the process, the ACVR argued, was to require voters to have a valid photo ID when they go to the polls.

According to NYU’s Brennan Center for Justice and the Justice Department, ACVR’s claims were pretty much baseless. Lorraine Minnite, a political science professor at Barnard College, went even further (PDF), calling the ACVR’s report “little more than a compendium of poorly scrutinized newspaper articles.” A report from the Federal Elections Commission also dismissed the group’s claims. But that wasn’t the point; the point, as has since become clear, was to use the specter of voter fraud to effectively suppress the vote of key Democratic constituencies like blacks, hispanics, students, and senior citizens.