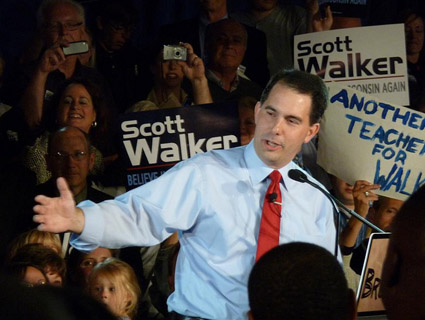 By demanding both financial concessions and an end to collective bargaining for his state’s public-sector unions, Wisconsin Republican Governor Scott Walker is pushing a far-right agenda, labor groups and Democrats say. Walker won’t negotiate with union leaders, and has even dismissed ideas from other Republicans in the GOP-controlled state senate. But Walker has a history of striking hard-line positions, and nowhere is that more true than on the most controversial social issue of them all: abortion.

Walker’s nearly nine-year record in the Wisconsin Assembly, the legislature’s lower house, reads like a pro-life handbook, an all-out assault on abortion rights. What’s more, the many anti-abortion initiatives he backed are perfectly in sync with the assault on reproductive rights now unfolding on the national level, where House Republicans recently gutted funding for Planned Parenthood and controversially tried to redefine “rape” to limit the long-standing exceptions to the Hyde Amendment, which bans federal funding for abortions except in cases of rape, incest, or to save a mother’s life.

Walker, the son of a minister, attended Marquette University in Milwaukee from 1986 to 1990, where he served as chair of Students for Life. He dropped out of the school without graduating in 1990, and unsuccessfully ran for the Assembly that fall. He ran again in 1993 in a special election and won an Assembly seat representing Wauwatosa, a city just outside of Milwaukee. It didn’t take long for him to take up the abortion fight.

In November 1996, Walker and Assemblywoman Bonnie Ladwig R-Caledonia announced plans to introduce a bill banning “partial-birth” abortions, or what’s medically known as dilation and extraction. Anti-abortion groups have condemned the practice, but groups that back abortion rights argue the procedure could save a woman’s life in the case of severe late-term complications during a pregnancy. Walker said partial-birth abortions are “never needed” to save lives, adding, “This procedure is not a medically recognized procedure.” (NPR has a good explainer of the procedure here.)

Walker’s effort to ban dilation and extraction mirrored an eight-year-long battle on the federal level to ban the practice. That federal fight culminated in 2003 when President George W. Bush signed the Partial-Birth Abortion Ban Act, outlawing the procedure. In 2007, the Supreme Court upheld the constitutionality of that law.

In 1997, Walker’s abortion crusade continued with a proposal banning state and local government employees from “promoting, encouraging, or counseling in favor of abortion services.” Walker’s proposal would also block “public facilities or public institutions or any equipment or any other physical asset that is owned, leased, or controlled by this state, an agency, or a local government unit” from offering abortions. Public employees would be subject to a $1,000 fine if they discussed abortions. The proposal caused a firestorm because of how it would affect the University of Wisconsin, which didn’t provide abortions but did teach and discuss them. One Democratic Assemblyman, Sheldon Wasserman of Milwaukee, said Walker’s proposal was tantamount to censorship. “It’s an outrageous and extreme position to say we’re not going to teach things to save people’s lives,” Wasserman was quoted as saying in the Capital Times. “Even the most avid pro-life people will say that. I don’t think [Assembly Republicans] know what they’re doing.”

According to the Capital Times, Wisconsin Assembly Republicans also gutted the $4 million budget for family planning resources in Wisconsin, not to mention ending all state funding for Planned Parenthood. They also proposed making it mandatory that parents be notified if their child tried to get a birth control prescription.

On the issue of prescriptions, another bill offered by Walker would allow pharmacists to refuse to fill prescriptions if they have moral or religious qualms. Targeted at birth control prescriptions, the bill would also block the state pharmacy board from disciplining pharmacists who don’t do their job. At the time, Democrats and pro-choice advocates feared the bill would eventually lead to pharmacies refusing to carry birth control at all. A version of that bill passed after Walker had left to serve as Milwaukee County executive, but then-Governor Jim Doyle vetoed the measure.

Years later, when Walker announced his gubernatorial run, he was embraced by anti-abortion groups. One endorsement in 2010 came from the hard-line group Pro-Life Wisconsin, which doesn’t think abortions should be legal at all under any circumstances, even in the case of rape, incest, or to save the mother’s life. And at a Wisconsin Right to Life convention in April 2010, Walker praised a county prosecutor who had threatened teachers for using a sex education curriculum implemented by Democratic Governor Jim Doyle that allowed for the discussion of birth control, sexually transmitted infections, and other related subjects. (A Walker campaign staffer told the Associated Press that Walker considered his “pro-life” views mainstream.)

Pro-choice groups also fear that a health care-related proposal in Walker’s “budget repair” bill could be a stealthy attack on abortion rights. The law would give emergency rulemaking power over the state’s low-income health care programs to the unelected Health Services department secretary, letting that official bypass the legislature. Amanda Harrington of Planned Parenthood of Wisconsin says she worries that Walker could use the change as a way to further attack abortion rights in Wisconsin. (A spokesman for Walker did not respond to a request for comment.) Wisconsin Medicaid and BadgerCare Plus currently cover abortions in certain situations, including in the cases of rape, incest, or to save a woman’s life. “He has really shown across the board opposition to women’s health,” Harrington says. She doesn’t expect that to change.