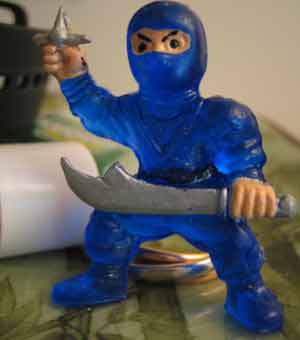 You know why being a diplomat is so awesome? In addition to living in exotic locations and meeting interesting people, you also get to debrief colorful characters. Like Iranian ninja masters.

Reading through the latest diplomatic traffic released by WikiLeaks, I came across this September 2009 communiqué from the US Embassy in Baku, Azerbijan. Its subject line reads, “IRAN: NINJA BLACK BELT MASTER DETAILS USE OF MARTIAL ARTS CLUBS FOR REPRESSION.” The cable details a meeting with a “martial arts coach and trainer,” who tells an embassy official “that private martial arts clubs and their managers are under intense pressure to cooperate with Iranian intelligence and Revolutionary Guard organizations, both in training members and in working as ‘enforcers’ in repression of protests and politically motivated killings.” From the cable:

xxxxxxxxxxxx observed that Iranian internal security forces are highly suspicious of these clubs as potential vehicles for organization and “combat” training of future protesters and regime opponents. Nonetheless, he asserted that their main motivation is seeking to control these clubs is less driven by such fears as by a desire to deploy their trained membership at will for “special tasks.” According to xxxxxxxxxxxx these tasks range from providing martial arts training to Revolutionary Guard members and Basij, assistance in protest repression, intimidation, and crowd control, to political killings. He observed that use of these clubs and their members provides the security forces with “plausible deniability” for dirty undertakings, as well as trained fighters and potential trainers.

The trainer/ninja master went on to detail the exploits of one ninja hit man:

xxxxxxxxxxxx said he personally knew one such martial arts master whom he said was used by the Intelligence service to murder at least six different individuals over the course of several months in xxxxxxxxxxxx said that the victims included intellectuals and young “pro-democracy activists,” adding that his assassin acquaintance was ultimately “suicided” by the authorities (i.e., killed in what was subsequently labeled a suicide).

I never realized that Iran had a big ninja contingent. Apparently they do. And if this video is any indication, they’re pretty bad ass.