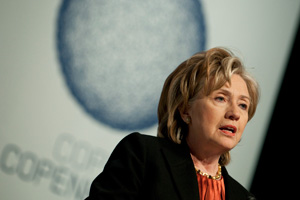 Hidden behind the save-the-world rhetoric of the global climate change negotiations lies the mucky realpolitik: money and threats buy political support; spying and cyberwarfare are used to seek out leverage.

The US diplomatic cables reveal how the US seeks dirt on nations opposed to its approach to tackling global warming; how financial and other aid is used by countries to gain political backing; how distrust, broken promises and creative accounting dog negotiations; and how the US mounted a secret global diplomatic offensive to overwhelm opposition to the controversial “Copenhagen accord“, the unofficial document that emerged from the ruins of the Copenhagen climate change summit in 2009.

Negotiating a climate treaty is a high-stakes game, not just because of the danger warming poses to civilisation but also because re-engineering the global economy to a low-carbon model will see the flow of billions of dollars redirected.

Seeking negotiating chips, the US state department sent a secret cable on 31 July 2009 seeking human intelligence from UN diplomats across a range of issues, including climate change. The request originated with the CIA. As well as countries’ negotiating positions for Copenhagen, diplomats were asked to provide evidence of UN environmental “treaty circumvention” and deals between nations.

But intelligence gathering was not just one way. On 19 June 2009, the state department sent a cable detailing a “spear phishing” attack on the office of the US climate change envoy, Todd Stern, while talks with China on emissions took place in Beijing. Five people received emails, personalised to look as though they came from the National Journal. An attached file contained malicious code that would give complete control of the recipient’s computer to a hacker. While the attack was unsuccessful, the department’s cyber threat analysis division noted: “It is probable intrusion attempts such as this will persist.”

The Beijing talks failed to lead to a global deal at Copenhagen. But the US, the world’s biggest historical polluter and long isolated as a climate pariah, had something to cling to. The Copenhagen accord, hammered out in the dying hours but not adopted into the UN process, offered to solve many of the US’s problems.

The accord turns the UN’s top-down, unanimous approach upside down, with each nation choosing palatable targets for greenhouse gas cuts. It presents a far easier way to bind in China and other rapidly growing countries than the UN process. But the accord cannot guarantee the global greenhouse gas cuts needed to avoid dangerous warming. Furthermore, it threatens to circumvent the UN’s negotiations on extending the Kyoto protocol, in which rich nations have binding obligations. Those objections have led many countries—particularly the poorest and most vulnerable—to vehemently oppose the accord.

Getting as many countries as possible to associate themselves with the accord strongly served US interests, by boosting the likelihood it would be officially adopted. A diplomatic offensive was launched. Diplomatic cables flew thick and fast between the end of Copenhagen in December 2009 and late February 2010, when the leaked cables end.

Some countries needed little persuading. The accord promised $30bn (£19bn) in aid for the poorest nations hit by global warming they had not caused. Within two weeks of Copenhagen, the Maldives foreign minister, Ahmed Shaheed, wrote to the US secretary of state, Hillary Clinton, expressing eagerness to back it.

By 23 February 2010, the Maldives’ ambassador-designate to the US, Abdul Ghafoor Mohamed, told the US deputy climate change envoy, Jonathan Pershing, his country wanted “tangible assistance”, saying other nations would then realise “the advantages to be gained by compliance” with the accord.

The Maldives were unusual among developing countries in embracing the accord so wholeheartedly, but other small island nations were secretly seen as vulnerable to financial pressure. Any linking of the billions of dollars of aid to political support is extremely controversial—nations most threatened by climate change see the aid as a right, not a reward, and such a link as heretical. But on 11 February, Pershing met the EU climate action commissioner, Connie Hedegaard, in Brussels, where she told him, according to a cable, “the Aosis [Alliance of Small Island States] countries ‘could be our best allies’ given their need for financing“.

The pair were concerned at how the $30bn was to be raised and Hedegaard raised another toxic subject—whether the US aid would be all cash. She asked if the US would need to do any “creative accounting”, noting some countries such as Japan and the UK wanted loan guarantees, not grants alone, included, a tactic she opposed. Pershing said “donors have to balance the political need to provide real financing with the practical constraints of tight budgets”, reported the cable.

Along with finance, another treacherous issue in the global climate negotiations, currently continuing in Cancún, Mexico, is trust that countries will keep their word. Hedegaard asks why the US did not agree with China and India on what she saw as acceptable measures to police future emissions cuts. “The question is whether they will honour that language,” the cable quotes Pershing as saying.

Trust is in short supply on both sides of the developed-developing nation divide. On 2 February 2009, a cable from Addis Ababa reports a meeting between the US undersecretary of state Maria Otero and the Ethiopian prime minister, Meles Zenawi, who leads the African Union’s climate change negotiations.

The confidential cable records a blunt US threat to Zenawi: sign the accord or discussion ends now. Zenawi responds that Ethiopia will support the accord, but has a concern of his own: that a personal assurance from Barack Obama on delivering the promised aid finance is not being honoured.

US determination to seek allies against its most powerful adversaries—the rising economic giants of Brazil, South Africa, India, China (Basic)—is set out in another cable from Brussels on 17 February reporting a meeting between the deputy national security adviser, Michael Froman, Hedegaard and other EU officials.

Froman said the EU needed to learn from Basic’s skill at impeding US and EU initiatives and playing them off against each in order “to better handle third country obstructionism and avoid future train wrecks on climate”.

Hedegaard is keen to reassure Froman of EU support, revealing a difference between public and private statements. “She hoped the US noted the EU was muting its criticism of the US, to be constructive,” the cable said. Hedegaard and Froman discuss the need to “neutralise, co-opt or marginalise unhelpful countries including Venezuela and Bolivia”, before Hedegaard again links financial aid to support for the accord, noting “the irony that the EU is a big donor to these countries”. Later, in April, the US cut aid to Bolivia and Ecuador, citing opposition to the accord.

Any irony is clearly lost on the Bolivian president, Evo Morales, according to a 9 February cable from La Paz. The Danish ambassador to Bolivia, Morten Elkjaer, tells a US diplomat that, at the Copenhagen summit, “Danish prime minister Rasmussen spent an unpleasant 30 minutes with Morales, during which Morales thanked him for [$30m a year in] bilateral aid, but refused to engage on climate change issues.”

After the Copenhagen summit, further linking of finance and aid with political support appears. Dutch officials, initially rejecting US overtures to back the accord, make a startling statement on 25 January. According to a cable, the Dutch climate negotiator Sanne Kaasjager “has drafted messages for embassies in capitals receiving Dutch development assistance to solicit support [for the accord]. This is an unprecedented move for the Dutch government, which traditionally recoils at any suggestion to use aid money as political leverage.” Later, however, Kaasjager rows back a little, saying: “The Netherlands would find it difficult to make association with the accord a condition to receive climate financing.”

Perhaps the most audacious appeal for funds revealed in the cables is from Saudi Arabia, the world’s second biggest oil producer and one of the 25 richest countries in the world. A secret cable sent on 12 February records a meeting between US embassy officials and lead climate change negotiator Mohammad al-Sabban. “The kingdom will need time to diversify its economy away from petroleum, [Sabban] said, noting a US commitment to help Saudi Arabia with its economic diversification efforts would ‘take the pressure off climate change negotiations‘.”

The Saudis did not like the accord, but were worried they had missed a trick. The assistant petroleum minister Prince Abdulaziz bin Salman told US officials that he had told his minister Ali al-Naimi that Saudi Arabia had “missed a real opportunity to submit ‘something clever’, like India or China, that was not legally binding but indicated some goodwill towards the process without compromising key economic interests”.

The cables obtained by WikiLeaks finish at the end of February 2010. Today, 116 countries have associated themselves with the accord. Another 26 say they intend to associate. That total, of 140, is at the upper end of a 100-150 country target revealed by Pershing in his meeting with Hedegaard on 11 February.

The 140 nations represent almost 75% of the 193 countries that are parties to the UN climate change convention and, accord supporters like to point out, are responsible for well over 80% of current global greenhouse gas emissions.

At the mid-point of the major UN climate change negotiations in Cancún, Mexico, there have already been flare-ups over how funding for climate adaptation is delivered. The biggest shock has been Japan’s announcement that it will not support an extension of the existing Kyoto climate treaty. That gives a huge boost to the accord. US diplomatic wheeling and dealing may, it seems, be bearing fruit.