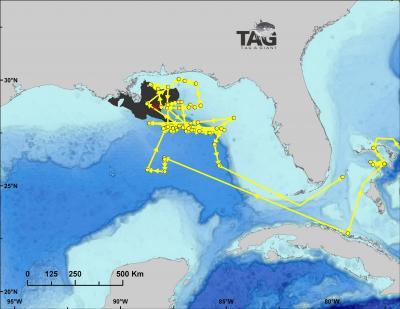 This shows the track (yellow line) and daily positions (dots) of a giant bluefin tuna electronically tagged off Canada on October 25, 2008—which spent the period from March 23-May 24, 2009, in the Gulf of Mexico. The track is overlaid on the area of the Deepwater Horizon oil spill as of May 24, 2010 (black). Peak spawning of bluefin tuna occurs in this area during April and May. Image courtesy Tag-A-Giant Foundation and Stanford University.

Sadly, the model also indicates the tuna are spawning there right now—and that the hotspots lie in waters befouled by the Deepwater Horizon oil spill.

The Gulf of Mexico bluefins have suffered a huge population decline since 1950. A 20-year plan to rebuild the stock has failed utterly. That failure led the United Nations to consider listing the species as endangered last March—a decision they cowardly backed out of. The senior author of the paper in PLoS ONE, Barbara Block, tells Stanford University:

“Both catch data and electronic tags indicate the Gulf of Mexico along the continental shelf is the preferred habitat of this majestic fish. I think it is amazing how precisely we can predict where the bluefin are. Unfortunately their spawning habitat overlaps the Deepwater Horizon oil accident site, and the timing of the spill coincides with the time when we expect them to be there spawning.”

(If you appreciate our BP coverage, please consider making a tax-deductible donation.)