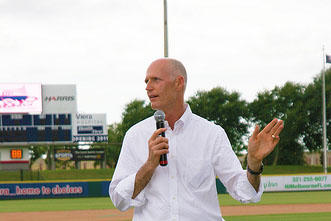 At least one of the self-funded “outsiders” of the 2010 midterms got something for his money. Unlike big-spenders Meg Whitman and Carly Fiorina in California and Linda McMahon in Connecticut, Florida conservative Rick Scott, the health care executive whose former company engaged in massive Medicare and Medicaid fraud under his watch, narrowly edged out Democrat Alex Sink, the state’s chief financial officer, in the Sunshine State’s bitterly fought gubernatorial race. So close was the race—at 11 am on Wednesday, Scott led 49 to 48 percent—that Sink didn’t concede to Scott until Wednesday near midday, even though pundits projected Scott to win much earlier Wednesday morning.  In all, Scott spent more than $70 million of his own money (his net worth is 2009 was $218 million) to topple Sink.

Scott brings to the governor’s mansion in Tallahassee quite a checkered past. For starters, there’s that $1.7 billion federal fine—the largest of its kind in American history—slapped on the hospital chain that Scott founded and led as CEO, Columbia/HCA, for health care overbilling. (Scott was not charged in the federal investigation, but the company pleaded guilty to 14 felony charges.) Since then, Scott has fended off similar accusations of overbilling by Solantic, the health clinic chain he subsequently founded and in which he’s the majority investor.

During the long slog to pass a health care reform bill, Scott helped to spearhead the anti-reform forces. The group he founded, Conservatives for Patients’ Rights, warned in advertisements that the new bill “could put a bureaucrat in charge of your medical decisions, not you.” Scott himself said the bill was “horrible for patients, it’s horrible for taxpayers, it’s horrible for business people.” Like his gubernatorial campaign, Scott’s attack group was largely a self-funded effort, with Scott spending $5 million of his own money to start CPR.

As for Scott’s policy positions, they hew pretty closely to the Republican party line. He’s pro-life. He opposes same-sex marriage rights. He’s called for bringing an Arizona-type immigration law to Florida. He wants to trim the size of the Florida government by slimming its workforce by 5 percent and cutting state spending to 2004 levels. And despite the BP Macondo well disaster, Scott wants to expand offshore drilling off of Florida’s coastlines.