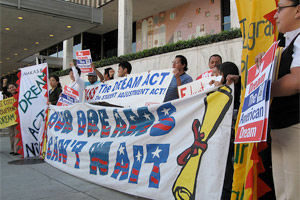 As the 111th Congress comes to a close, GOP lawmakers are preparing for what promises to be a dramatic lame-duck clash over immigration. Last week, Majority Leader Harry Reid announced he’d schedule a vote on the DREAM Act, which would create a path to legalization for certain undocumented immigrants who came to the US before they were 16 years old and completed two years of college or military service. The move prompted Republican staffers to circulate talking points from Sen. Jeff Sessions (R-Tex.) claiming that the bill would grant “amnesty” to some 2.1 million undocumented immigrants, give “college preference to illegals over citizens,” and even provide “safe habor” to criminals.

Others on the right have slammed the bill for extending financial aid and other perks to undocumented students: Conservative pundit Michelle Malkin has railed against the legislation as an “illegal alien student bailout.” Tea party activists, meanwhile, have bashed it as “a spending nightmare that we cannot afford.” On the other side of the debate, advocates have touted the bill for rewarding “the best and the brightest” immigrant youth, arguing that they shouldn’t be punished for the sins of their parents. They argue that while 2.1 million immigrants may be eligible for legalization, the same non-partisan group that provided the number estimates that only about 38 percent, or 825,000, would likely gain citizenship. Grassroots DREAM activists, in the meantime, have been ramping up their own advocacy, especially on college campuses: over the last week, two student body presidents in California and Florida outed themselves as undocumented, and students in Texas are currently on a hunger strike.

Despite Reid’s pledge to put the bill on the lame-duck calendar, the Democrats don’t have the votes yet. Sen. Mark Pryor (D-Ark.) supported the GOP filibuster of the legislation when it came up in September, and fence-sitters including Claire McCaskill (D-Mo.), Jon Tester (D-Mont.), and Ben Nelson (D-Neb.) face tough 2012 re-election races in increasingly conservative states. This means Democrats will have to scrounge up even more GOP votes as a result, and Sen. Richard Lugar (R-Ill.), a co-sponsor of the bill, so far stands alone in backing the bill on the Republican side. Exiting Sen. Bob Bennett (R-Uta.) may be persuadable, having previously promised to support the legislation on his way out, but the Democrats may need anywhere from five to seven Republican votes in total—a decidedly uphill battle.

But even if the federal government fails to act, advocates for the DREAM Act have set their sights on other battlegrounds. State governments have stepped into the breach, debating whether undocumented students should receive in-state tuition, financial aid, or even admission to public universities. Meanwhile, the number of undocumented student has grown dramatically in states like California.

At the University of California-Berkeley, for example, one college official estimates that the undocumented student population is currently about 400 students—a figure that’s nearly doubled since five years ago. Fabrizio Mejia, interim director of Berkeley’s Student Life Advising Services, says the numbers have risen not only because the undocumented population as a whole has increased, but also because of a growing support network for such students. “There is an underground network of staff that work on the issue and pass along information about particular students,” Mejia says, describing how administrators have worked informally to identify and help undocumented students. “We create listservs to reach out to them, saying, ‘we understand that you may or may not be in this situation.'”

California is among the 10 states that have passed legislation allowing undocumented students who are state residents to receive in-state tuition—a 2001 law that the California Supreme Court upheld last week. Even so, in-state tuition at Berkeley, for instance, is nearly $13,000 a year, and California’s budget crisis has forced the state’s public colleges and universities to impose fee hikes. Disqualified from federal and state financial aid, many scholarships, and campus work-study programs, undocumented students have typically struggled to scrape together the funds to pay for school. “They’re working sometimes two or three jobs,” says Kent Wong, director of the UCLA Center for Labor Research and Education. “They work as tutors, babysitters, housekeepers—various occupations in the underground economy.” Partly as a result of the new fee hikes, about 15 percent of UCLA’s undocumented student population has dropped out since January, he adds.

Meanwhile, sympathetic college officials and student groups have tried to gain the trust of undocumented students, offering them financial planning advice and other support. The University of Southern California has helped compile an “undocumented student guide,” informing students that they aren’t requiring to provide social security numbers or proof of legal status—and to leave blanks on official university forms rather than providing false information. At UCLA, student activists have fought to allow undocumented students to apply for internships without having to show state or federal ID. They’ve also created housing co-ops and a food pantry to help undocumented and poor students meet their basic needs.

As the immigration debate has heated up, undocumented students have become a far more visible organizing force on college campuses. “There was a time when we wouldn’t share where our meetings where or share our status with anybody,” says Sofia Campos, a UCLA student who discovered she was undocumented only after trying to apply for federal student aid when she was a high school senior. “Today, it’s a completely different story—student government and population should recognize we contribute a lot.”

Campos is the co-chair of a UCLA student group that’s given scholarships to undocumented students who’ve been separated from their families because of deportation raids—some of whom are in deportation proceedings themselves. Such groups have also fueled the growth of a national grassroots movement that’s rallied behind the DREAM Act. Immigration advocates often talk about legalization as a way to bring undocumented “out of the shadows.” But undocumented students who’ve had universities on their side—and, perhaps, the bravado of youth—have outed themselves in growing numbers. In recent months, DREAM activists have conducted everything from hunger strikes to sit-ins in John McCain’s office, turning themselves into possible targets for deportation. Some UCLA students have even taken to wearing “I’m undocumented” t-shirts around campus.

High-profile university officials have joined the fight as well, with leaders from the University of California system, Harvard, MIT, and other universities lobbying for the DREAM Act’s passage. While political gridlock is likely to continue in Washington, the university and student-led advocacy has helped advance a bill in California that would extend state financial aid to undocumented students. Governor Arnold Schwarzenegger—though himself an immigrant—has vetoed the legislation twice, but it is expected to pass in the early months of incoming Democratic Governor Jerry Brown‘s administration.

Conservatives have attacked such measures for taking admission spots away from legal citizens and saddling taxpayers with the costs of educating the undocumented population—even accusing university administrators of violating the law by harboring immigrants. Kansas attorney (and secretary of state-elect) Kris Kobach—the mastermind behind Arizona’s harsh immigration law—originally defended the out-of-state students who sued the state for offering in-state tuition. Malkin has attacked sympathetic school administrators like Berkeley’s Chancellor, Robert Birgenau, for skirting federal law in defending the campus’ undocumented population. “Hiring, recruiting, and harboring illegal aliens are all federal felony offenses…the chancellor has now signaled that his campus will look the other way at federal immigration law to assuage a bunch of hungry open-borders zealots.”

And a handful of conservative states are now moving to restrict undocumented immigrants’ access to public education. Georgia passed legislation denying in-state tuition to undocumented students, joining Arizona and South Carolina. Last week, the Georgia Board of Regents voted to prohibit undocumented students from attending the state’s most selective public universities—even though they make up less than 1 percent of the student population. The vote came months after a student at Georgia’s Kennesaw State University was threatened with deportation after committing a minor traffic violation in March. University officials rushed to the student’s defense, successfully convincing federal officials to let her complete her studies before moving ahead with deportation proceedings.

The move elicited a fierce backlash from conservatives who accused the student of exploiting the system and the university of bending to political pressure. “Most citizens really don’t care how much ‘potential’ the young lady has,” wrote a local news columnist. “They’ve bent over backwards to bring her back when I doubt they’d be doing the same if she didn’t have the backing of various Latino activist groups.”

Critics of California’s system have similarly argued that public universities are taking admission slots away from legal citizens and wasting taxpayer resources on students who will remain undocumented after graduation. “As a graduate of UC Davis myself, I find it somewhat troubling that the administrator of the UC system and other state schools would be working overtime to encourage the granting of seats to [undocumented] students,” says Jon Feere, legal policy analyst for the Center for Immigration Studies, which advocates for stricter immigration controls. “U of C should be trying to create a student body that will be able to legally find employment upon graduation.”

Advocates for these students admit that post-graduation employment prospects for undocumented college graduates remain murky. Such students have at times been able to carve out a path for themselves as independent contractors or consultants for nonprofit agencies, for instance, Berkeley administrator Mejia says. But, he adds, others have been forced to take work as waiters and other low-wage jobs, despite their college education. Such harsh realities also make it clear that state and local efforts can go so far to help the undocumented in the absence of federal action.

And though undocumented students may be outing themselves in growing numbers, many are still loathe to disclose their status to university officials or other authorities—particularly at a time when deportations reached a record high. “Most of the students don’t know what’s going to be triggered once they let someone know,” says Mejia. “It’s a de facto ‘Don’t ask, Don’t tell’ policy.'”