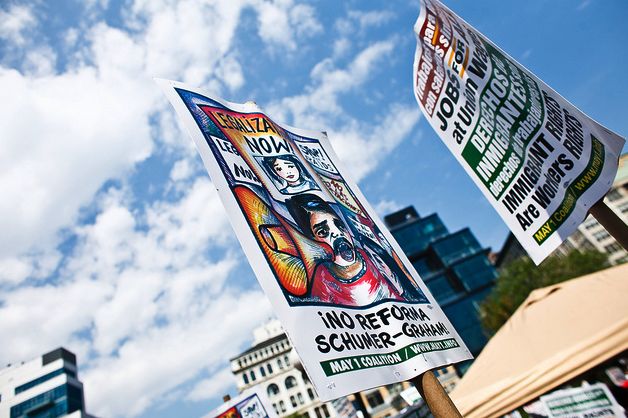 Well before Arizona passed its controversial immigration law this year, a slew of other states and municipalities tried to pass laws targeting illegal immigrants. A federal appeals court ruled today that Hazleton, Pennsylvania, could not fine landlords who rent to illegal immigrants or deny business permits to companies that hire them. The laws, spearheaded by Republican Mayor Lou Bartletta who’s currently running for Congress, were passed in 2006 after two illegal immigrants were charged in a fatal shooting.

The federal appeals court ruled that the Hazleton laws were illegal because they pre-empted federal authority on immigration, which was the same rationale cited by the judge who blocked Arizona from implementing its immigration law this summer. “We are…required to intervene when states and localities directly undermine the federal objectives embodied in statutes enacted by Congress,” wrote Chief Judge Theodore McKee.

Before Arizona, Hazleton had been one of the biggest rallying cries for immigration activists on both sides of the debate, and the city’s laws inspired many copycat measures in other communities. The ACLU, which was among the civil rights groups that challenged the laws, hailed the ruling as a major victory. “This is a major defeat for the misguided, divisive, and expensive anti-immigrant strategy that Hazleton has tried to export to the rest of the country,” said Omar Jadwat, an ACLU staff attorney, in a press release.

The Hazleton ruling should put a damper on some of the anti-immigration laws that states and local communities have tried to put on the books, and help the Obama administration’s case that the Arizona law is unconstitutional. It’s also another blow to Kris Kobach—the conservative attorney mastermind behind the Arizona law—who was called in to defend the Hazleton measures as well.