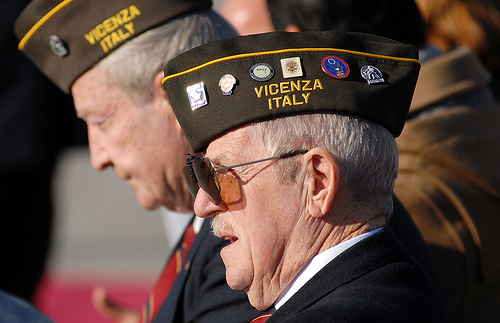 This morning, Mother Jones reported on a tea party-fueled mutiny in the country’s top club for combat veterans, the Veterans of Foreign Wars. Strangely, the captain of this 2.2 million-strong ship is now one of the mutineers.

Seems many rank-and-file VFW members didn’t take a shine to the organization’s political wing, VFW-PAC, and its Election Day endorsements. The group reserved its seal of approval for incumbents only, including the likes of Democrats Barbara Boxer, Harry Reid, and Nancy Pelosi. In doing so, VFW-PAC snubbed at least a dozen military vets running for Congress as tea party-endorsed Republicans, from the Palin-endorsed Alaska Senate hopeful Joe Miller to a card-carrying VFW member (and shooter of Iraqis), Ilario Pantano, in a North Carolina House race. MoJo talked to VFW members who were angry at the group’s pooh-poohing of these “patriots” and discovered a few smaller, GOP-financed, right-wing vets’ groups stirring the pot of discontent.

Now, in a development straight out of Colbert Nation, even the VFW’s commander is PO’d at the organization he skippers. The club’s home page is emblazoned with a stern letter from him to the membership, sharing their discontent with the club’s political endorsements. “Our recent endorsement process unintentionally provided favoritism to the incumbents. It is now evident it was unfairly skewed and actually subverted that process,” writes commander-in-chief Richard Eubank. “We are requesting the chairman and the directors of the Political Action Committee immediately rescind their endorsement actions.”

“Requesting,” he says, because he doesn’t have any control over the group’s PAC. Or he claims not to. That’s not what VFW members think, not the ones MoJo talked to. Nor are their online stewards, the milblogging community, doing much to back up the commander’s claims. “Legally and Financially, the VFW-PAC is a separate organization from the VFW, but let’s not kid ourselves, the two are closely related,” one wrote yesterday.

What’s it all mean? Perhaps the usual tea party narrative we’ve learned from the elections and primaries so far this year: These patriots will destroy a political party or a storied service organization—or maybe even a nation—in order to save it.