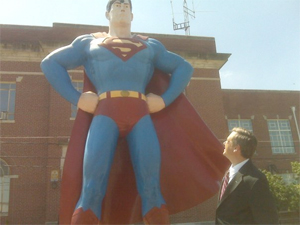 Rep. Mark Kirk (R-Ill.) measures himself against a Superman statue on the Senate campaign trail in Metropolis, Illinois / Courtesy of <a href="http://www.facebook.com/KirkForSenate?v=photos&sb=4#!/photo.php?pid=1993874&id=6373938038">Mark Kirk for Senate</a>

It’s disturbingly easy to misrepresent your military service in workaday America. In a culture that’s disposed to think of all veterans as heroes (on the right) or victims (on the left), few civilians have the inclination or the intestinal fortitude to scrutinize someone else’s service record and assent to judge another’s honor or Americanness. As a consequence, few among us know what a long-form DD-214 is, much less how to read one. (It’s a service member’s discharge form, which shows the type of discharge, their rank, awards earned, and the like.)

That said, veterans themselves have a high sensitivity to, and low threshold for, military fakers. Which makes it difficult for Americans in the public sphere—politicians, say—to misrepresent their service.

Mark Kirk is learning that now. As a 21-year veteran of the Navy Reserve’s intelligence community, there’s no doubt that the Republican Illinois congressman, who’s now running for Senate, has had a full, eventful military career. Yet in the past few weeks, journalists—spurred on by the work of a determined blogger and reservist, Terry Welch—have discovered a number of misrepresentations and misrememberings in Kirk’s service claims. Did he win an intel officer of the year award? (No.) Did he “deploy” to Afghanistan? (No.) And now, there’s a new revelation: When Kirk said he’d “never violated Defense Department policies,” he was either fuzzy on important details of his career—not typical of a career naval aviation intelligence officer—or he was knowingly telling a mistruth.

According to Welch, Kirk was disciplined after partisan political campaigning while on duty, including Tweeting his wherabouts on a Pentagon mission:

Commander Kirk was counseled about each of his violations after they occurred and signed a statement acknowledging the limitations on his ability to participate in campaign activities while on active duty. He was required to complete this acknowledgement before being allowed to begin active duty in December 2009.

These allegations follow last week’s news that Kirk was falsely trumpeting his two-week reservist trips to Afghanistan (ATs, in the military parlance) as “deployments.” In fact, you can’t accomplish much of note in a two-week trip besides learning the ropes—which is why, Terry notes, the Navy doesn’t recognize Kirk as a deployee:

Deployment. Either a period of at least 90 consecutive days with a deployed unit or two deployments of at least 80 days each with a given 12-month period. No waivers of this requirement will be made.

What has Kirk’s response to this mess been? Well, he’s released three of his performance evaluations online, all from 1999 and 2000, and has yet to release any records from the time he spent in Afghanistan or the times addressed by the DOD’s reprimand. In lieu of forthrightness on his career record, he’s accused the White House of a smear campaign against him. Said a spokeswoman for the Kirk campaign: “This raises grave concerns and questions about who gained access to Kirk’s confidential records. The document in question should be viewed for what it is—a baseless political ploy by partisans bent on defending a U.S. Senate seat at any cost.”

But it’s Kirk himself who made his service an issue for voters—and according to the recent releases, he was doing it while on duty and in uniform. Sure, attacks on military records are often partisan attacks (See: Kerry, John, and Bush, George W.). But extolling one’s military record in campaigning is a partisan business, too: For Republican candidates like Kirk and Rick Barber, it’s a signal to voters, telling them: “I’m strong on national security. I understand what’s at stake and what it takes to make America safe.” But if you can’t represent your service accurately, how likely are you to tell the truth—or to really listen to it when it’s presented to you—on real issues of the national interest? Can you fairly legislate matters of force composition (gays, women, ships, planes) or strategy (sanctions, war) when you yourself make an issue of your integrity and experience?

Kirk’s not alone in this election cycle; the trials of Connecticut Senate candidate Richard Blumenthal are well-known. But Blumenthal told one consistent mistruth, and owned up to it when confronted with the evidence. Likewise, Kirk has the power to end this scrutiny, and to demonstrate his command of the Navy’s core values—honor, courage, commitment—by making an unequivocal public statement and releasing his pertinent records, a long DD214 and some performance evals from the time periods in doubt.

He owes it not only to voters, but to the 1.3 million or so active and reserve service members who demonstrate basic honesty by not obfuscating their records. You don’t have to agree with the military’s policies, nor do you have to celebrate every GI Joe or Jane as a hero, to believe that they’re owed some explanation from a politician who seeks to profit by his own service. As our esteemed Kevin Drum put it, “Kirk says that in the future ‘I need to be humble about my military record.’ Roger that.”

Whether Kirk treats that sudden realization—”I need to be humble”—as a command directive, or a mere suggestion, will tell you everything you need to know about him as an officer, a gentleman, and a candidate for office.