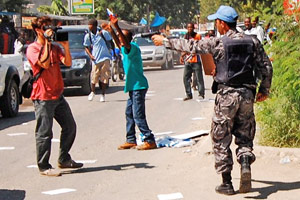 When I showed this amazing picture to my friend, after she registered what she was looking at, her eyes went huge while she exclaimed, “Oh my god!” with her hand over her mouth. The scene is a protest last week in Port-au-Prince. The guy on the left is a clearly unarmed and videotaping journalist from Texas named Ansel Herz, whom I happened to work with when I was in Haiti last month. The uniformed fellow pointing a gun directly at his face is a United Nations peacekeeper.

I didn’t meet many (okay, any) Haitian fans of MINUSTAH, the UN stabilization force that’s been in the country since 2004. I have, for the record, met some MINUSTAH who are definitely good guys and have, for example, helped a woman in labor get to the hospital, and helped stop a man who was trying to kill his wife for refusing to have sex with him. But the force has also shot civilians. It’s had to have meetings about how not to sexually abuse the Haitian population. In fact, last week’s protest erupted after the UN officially renewed MINUSTAH’s mandate. Some of the protesters’ complaints, which echo those I heard while in-country, are that MINUSTAH doesn’t actually do anything to protect civilians living in filthy, violent, rape-infested displacement camps, and that the money could be better spent dealing with those issues.

I asked Ansel how he ended up on the business end of a UN gun, just in case there was any kind of conflict or missing context surrounding this photo. Not so much, he says: “Maybe they felt threatened by my camera.”