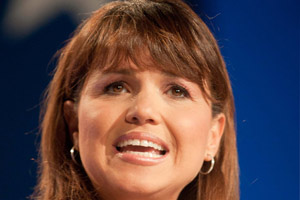 Last week, Mother Jones ran a story about the campaign manager for Christine O’Donnell’s unsuccessful 2008 Senate campaign in Delaware, noting that this aide, Jon Moseley, once wrote an article claiming that Obama is a secret Muslim. The article reported that tea partier O’Donnell’s current Senate campaign has made payments to Moseley. After the story was published, Moseley sent Mother Jones an angry email insisting that he was not involved in her 2010 Senate bid and that the payment in the Federal Election Commission records this year was for money O’Donnell owed him from the 2008 effort. He wrote, “I have no relationship with Christine O’Donnell’s current Senate campaign… I have not communicated in any way with Christine O’Donnell or her campaign since June 2008, except concerning her campaign paying off expense reimbursements from 2008, which they ultimately did.”

But days later, a Virginia tea party group sent out an email alerting members to a bus trip being organized to transport volunteers to Delaware to campaign for O’Donnell in mid-October. Who should be organizing the trip but Moseley himself.

Moseley, a longtime conservative policy advocate, has set up a website to “support Christine.” He claims it is an “independent expenditure” effort that is “not affiliated” with her campaign—which means it’s not covered by the campaign contribution and spending limits that apply to the actual O’Donnell campaign. Independent expenditure campaigns are common, with unions, business groups, and ideological outfits routinely mounting them to support or block candidates by airing ads or running get-out-the-vote projects. All this is legal, as long as these groups do not coordinate their activities with candidates and their campaigns. (For example, a labor union could not ask a candidate where it would be best for it to focus a get-out-the-vote push.)

Moseley’s effort appears geared toward shipping out-of-state volunteers to Delaware. For $55, Virginia residents can hop aboard a bus in Springfield and head to Delaware for the day to knock on doors and hand out flyers for O’Donnell. Another bus will be coming from York, Pennsylvania. But the group’s website describes the project in a way that makes it seem as if it’s being coordinated with O’Donnell’s campaign, which would be a violation of federal election laws.

On the bus sign-up website, Moseley writes that after the buses meet people arriving by car at a mall in Delaware:

we will go where we are needed to campaign.

We will do whatever Christine’s campaign needs us to do. [emphasis added] Are you physically limited? Activities MIGHT include walking neighborhoods to pass out literature, yard signs, bumper stickers, etc. You might also stand still handing out literature at a grocery store or high traffic location if you are physically limited. We also hope to attend a rally with the candidate.

THIS IS AN INDEPENDENT EXPENDITURE and not affiliatied [sic] with any campaign. Led by Jonathon Moseley, formerly Christine O’Donnell’s 2008 campaign manager, but who is not currently associated with the Christine O’Donnell campaign. This bus trip is not associated with any organization. Organizers are using their own private time — any other employment or associations are coincidental and not related. This project will * NOT * donate any money to any candidate or campaign, except possibly to BUY for our own use literature, yard signs, or bumper stickers to be distributed by our participants at cost.

The line about doing “whatever Christine’s campaign needs” suggests that Moseley knows what the campaign wants. And how could he without communicating with the campaign? Perhaps this is a case of loose rhetoric. But it could be enough to draw the interest of the Federal Elections Commission. Neither Moseley nor O’Donnell’s campaign returned calls for comment.

On the website, Moseley also provides some information about himself. He claims to have been instrumental in the “swiftboating” of Sen. John Kerry during the 2004 presidential campaign. His brother-in-law apparently owns the publishing house that released Jerome Corsi’s book Unfit for Command, which was part of the smear campaign that attacked Kerry’s military record in Vietnam. Moseley claims to have helped get the the book published by working with Ohio talk show host Paul Schiffer, who took credit for helping bring together Swift Boat Veterans for Truth. Earlier this year, Moseley worked on Schiffer’s failed congressional campaign.

Moseley’s current work for O’Donnell doesn’t seem as sophisticated (or elaborate) as the Swift Boat campaign, which was conducted by an independent expenditure group looking to boost George W. Bush’s reelection chances. It’s focused on a campaign basic: finding out-of-state tea partiers willing to put boots on the ground for O’Donnell, turning her Senate bid into a national cause.