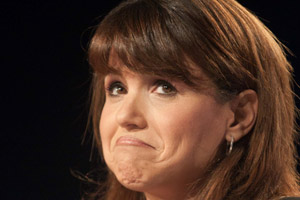 Is Christine O’Donnell now complaining about the sort of attacks she once hurled?

On Tuesday night, the Delaware Republican Senate candidate and tea party star appeared on—where else?—Fox News and denounced her foes for relying on personal atacks to discredit her. Referring to Democratic criticism of O’Donnell, Fox host Sean Hannity asked, “Do you think this is an attack on religion? On your religious beliefs?” O’Donnell replied, “They’re trying to paint me as an extremist, so that people won’t pay attention to my message.”

During the segment, she also groused, “They’re attacking me personally…They’re not attacking me on my positions. They’re trying to attack me.”

But O’Donnell is no stranger to launching personal attacks. Three years ago, she appeared on—where else?—Fox News and assailed the religious views (and the morality) of a prominent politician: House Speaker Nancy Pelosi.

On January 25, 2007, O’Donnell, then the president of an outfit called the Faith and Flag Alliance, was a guest on the The O’Reilly Factor, according to a transcript of the show (which is not posted on the internet). The subject was supposed Christianity-bashing, and Bill O’Reilly had pegged the segment to the release of an HBO documentary on militant Christians. The film had been made by Alexandra Pelosi, a daughter of Nancy Pelosi. O’Reilly noted that he had “nothing against” Pelosi’s film, but he decried what he considered to be the mainstream media’s marginalization of Christians. He asked O’Donnell about the media’s exploitation of the “weird behavior” of militant Christians to undermine all Christians.

First, let me say that Nancy Pelosi has—can benefit from making Christians look bad because she touts her Christianity when it’s politically expedient for her, yet she doesn’t follow any of the Christian moral principles.

O’Reilly interrupted O’Donnell to say, “I don’t think that’s fair…I don’t think you should be judging Nancy Pelosi.” But O’Donnell went on to criticize Pelosi for claiming that “she’s a Catholic woman whose Catholicism shapes her policy.” O’Donnell maintained that the House speaker was not truly a Catholic:

What I want to point out is that Christianity is not a set of beliefs that you can pick and choose from. It’s not a smorgasbord; it’s not a buffet. You either embrace it all and represent it all, or embrace a worldview that says you can do whatever you want.

O’Donnell was essentially contending that the only real Christian is a fundamentalist Christian—and saying that Pelosi was not a real Catholic because she did not adhere to O’Donnell’s definition of Catholicism. O’Reilly remained unconvinced and told O’Donnell, “People shouldn’t be judging people in a moral way unless they break the law.” He cut to another guest, and O’Donnell wasn’t heard from again that show.

Though Nancy Pelosi had not been the topic at hand, O’Donnell had insisted on arguing that the House speaker was not a good Christian. Now O’Donnell cries foul, griping that critics are assailing her on personal terms, not addressing her policy ideas. It’s an odd complaint, given that O’Donnell has already thrown stones in this particular glass house.

During her recent interview with Hannity, O’Donnell, who canceled two Sunday talk show appearances this past weekend, also said she won’t be appearing on national television shows: “I’m not going to do any more national media because this is my focus: Delaware is my focus, and the local media is my focus.” Meanwhile, O’Reilly is still trying to book O’Donnell for his show, and he issued this quasi-warning:

I’m trying to be fair to Christine O’Donnell. She’s been on the program a couple of times, and we have some kind of crazy stuff that she said. We’re not going to play it yet. I don’t think it’s relevant—yet. We’d still like Ms. O’Donnell to come on the Factor. I’m not in the business of injuring her. I’d like to see if she’s the better candidate.

Calling the House speaker a lousy Christian may not count as “crazy stuff.” But appearing on O’Reilly’s show in November 2007 to bemoan cloning, O’Donnell declared that “American scientific companies” had created “mice with fully functioning human brains.” With O’Reilly and Bill Maher searching through their video archives (O’Donnell appeared almost two dozen times on Maher’s Politically Incorrect show), O’Donnell may soon have more to explain than her personal attack on Pelosi’s faith.