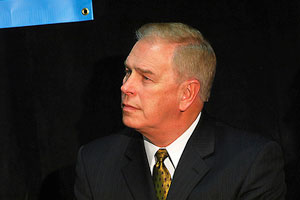 Four weeks ago, Ohio Governor Ted Strickland looked cooked. The incumbent Dem was trailing his challenger, former GOP congressman (and Lehman Bros. banker) John Kasich, by double digits in some polls. But this week, things suddenly started looking brighter for Strickland. Several polls put him a few points back, within the margin of error, while a partisan Dem poll showed him in the lead. Polling guru Nate Silver upgraded Strickland’s chances—but only to 13 percent, up from 8 percent last week.

What’s causing the shift in the polling? It’s hard to know for sure, but maybe Strickland’s relentless campaign to paint Kasich as a Wall Street banker who is out of touch with Ohioans is finally having an effect. If Strickland starts pulling into the lead in the next round of polls, it could be a great sign for Dems nationwide—and a data point to support the argument that moving left and getting angry could actually help some candidates. Strickland sure is railing away at Kasich, the GOP, and the banks. Here’s CNN’s Peter Hamby, who’s in Ohio covering the campaign:

At a union hall in Cleveland Tuesday, at a student center at the University of Akron and at a rally on the state house steps in Columbus, the usually mild-mannered former minister unleashed a torrent of attacks against his Republican challenger, John Kasich, and the Bush administration, pointedly blaming them for bringing the country to the brink of a great depression.

“I am angry because the Republicans under George Bush brought this economy to the brink of total collapse, and the people who carried out those shenanigans on Wall Street, people like John Kasich absolutely just about caused us to go to the depths of economic destruction,” he roared in Cleveland, bringing nearly 200 union members to their feet.

Strickland repeatedly mentioned Kasich’s ties to Lehman Brothers – where he worked as a managing director for nine years – at one point making the claim that his opponent will bring “Wall Street thinking and Wall Street behavior” to the governor’s office.

“And we’re going to say hell no!,” Strickland thundered, banging his fist against the podium. “No we’re not going bring that into the governor’s mansion. Hell no you won’t! We’re going to fight this guy.”

As Hamby notes, while other vulnerable Dems have broken with the White House, Strickland has done little to distance himself from President Obama. Instead, he’s attacked the GOP and its ties to the economic collapse. He’s also looking past the midterms to a potential Dem resurgence two years hence. “We are coming after you, Newt Gingrich and Sarah Palin and Tim Pawlenty and all of the right-wing extremists,” he told an audience in Akron earlier this week. “We are coming after you in 2012, and we will re-elect Barack Obama to be a second-term president of the United States of America.”