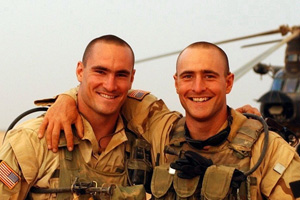 Last week, the Yale College Democrats dropped their support for an on-campus screening of The Tillman Story, a documentary about the late NFL star turned Army Ranger. The Dems feared that the event was being turned into an attack on retired Gen. Stanley McChrystal, the former commander of US troops in Afghanistan, who will teach a class at Yale this year. McChrystal does figure into the saga—in 2004*, he recommended Tillman for a Silver Star for valor “in the line of devastating enemy fire” despite already knowing with “near-absolute certainty” that Tillman had been killed by friendly fire. But McChrystal is not the focus of the movie, and the Dems felt that the way the screening was being promoted focused too heavily on painting McChrystal as a “bad guy,” according to the original Yale Daily News report on the controversy.

On Friday, I wrote a blog post criticizing the Dems for dropping their support of the film. Since then, I’ve spoken to Amir Bar-Lev, the director of “The Tillman Story,” Charles Musser, the Yale professor who organized the event, and Ben Stango, the president of the Yale Dems, and exchanged emails with university spokesman Tom Conroy. I’ve also obtained copies of the draft press releases that originally upset the Dems. Together, these sources paint a more complete picture of what happened.

Stango says that he’s frustrated with how his organization’s decision has been covered in the media. “The basic reaction has been: Oh, these cowards are protecting a war criminal,” he says. (I definitely didn’t go that far.) Stango maintains that the decision to drop sponsorship of the screening was to “protect the integrity” of the Yale Dems. Although he was initially enthusiastic about the event, Stango said he realized soon after he saw a draft press release that “the whole tone of the event was ‘Lets bash McChrystal to drum up some press for the film.'” Stango didn’t think that the organizers would be willing to make adjustments to the event, so the Dems backed out. “There’s nothing productive that’s going to come from where the event is coming from now,” he says. But it seems that his organization is still open to compromise—while the Yale Dems are not putting their name on the event, they’re nonetheless encouraging members to attend.

As I mentioned above, I’ve seen the original draft press release that worried the Dems. Here’s one offending section:

Yale recently announced that former General Stanley McChrystal will be teaching a graduate course on leadership at the University. The Tillman Story, a documentary about the life of the late Cpl. Pat Tillman, raises serious questions about General McChrystal’s role in the cover up of Cpl. Tillman’s death in 2004. Following the screening, which will take place at the Whitney Center on campus, the Yale Democrats will host a townhall discussion focusing on General McChrystal’s role in the cover-up in the context of his new position at the University.

A later version of the press release drops the reference to a “discussion focusing on” McChrystal, and instead only mentions a “discussion about the movie.” It de-emphasizes McChrystal’s role in other ways, too. (You can compare the two documents yourself here: PDF 1, PDF 2. I’ve redacted contact information.) Musser has promised to send me a final version of the press release when it is finished. (UPDATE: Here it is.) But the changes between the two draft releases suggest that the organizers of the event were flexible and willing to address concerns about focusing too much on McChrystal.

When I asked Bar-Lev and Musser about the McChrystal issue, they both said it was overblown. “Our film is not an attack on General McChrystal and the event is not an attack on anybody,” Bar-Lev said. “It’s part of a dialogue that any institution of learning in a democracy should welcome.” Musser emphasized that The Tillman Story is just the latest in a series of Iraq and Afghanistan films that his program has screened at the University. He said he’s confident that McChrystal can take any criticism and he believes that the audience will be “sophisticated” and won’t simply take attacks on the retired general at face value.

I think what happened here is a case of misunderstanding, and perhaps overreacting to, the publicity business. I can see why Stango and the Dems were concerned by the original framing of the event, and why they might have seen it as sensationalistic. But that’s what press releases are supposed to do—sex things up to get media interested in an event. A press release can’t predict which direction a town hall-style discussion is going to go. (As it happened, the controversy over the Dems’ withdrawal just drew more attention to the event, so in that sense, the original press release worked.) In the end, I’m going to side with Yale spokesman Tom Conroy. “This sounds like a fairly typical Yale event,” Conroy wrote in an email:

There’s a guest speaker, in this case a film director who is going to discuss his work with an audience following the screening. I liked the comment I saw in the Yale Daily News by film professor Charles Musser, who said, “I think that the film will speak for itself, and what people take from the film and how people want to frame the film is something we can all discuss.” Yale has no preference as to how the discussion goes with the guest, or what aspects of the film people focus on.

The final event may be more lively because of the controversy the Dems’ withdrawal has created. Stango and the his group certainly have the right to make these sorts of decisions for their organization. But staying on board would not have harmed the group’s reputation. The draft press releases make clear that the original event would have given the Dems time to speak, and suggest that organizers were willing to tone down their rhetoric in response to concerns. If the Dems felt that McChrystal was being unfairly attacked, they could have said so at the event itself. Sponsoring such an event would emphasize that the Dems stood for lively, vigorous debate—even when they may disagree with some of the participants, and even if the subject is a member of the Yale community. I doubt that anyone—even Prof. McChrystal himself—would have held that against them.