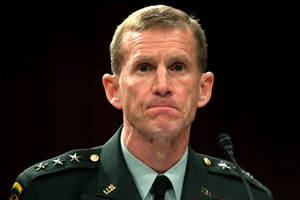 Gen. Stanley McChrystal, the former commander of US troops in Afghanistan, resigned in disgrace in June in the wake of intemperate—and, some say, insubordinate—comments that he and his staff made to a reporter for Rolling Stone magazine. (The RS article is here.)

Like most famous people who get fired, McChrystal landed on his feet—as a lecturer at Yale. But even though the school year has barely started in New Haven, McChrystal’s already triggering controversy there, too. This time, the uproar’s not about the Rolling Stone piece. It’s about one of McChrystal’s first tours in Afghanistan, when he was in charge of the Special Operations task force that included NFL star-turned Army Ranger Pat Tillman.

Amir Bar-Lev, the director of The Tillman Story, a documentary about the late NFL star-turned Army Ranger, is hosting a screening of the film on Yale’s campus on September 11. (Elizabeth Gettelman recently reviewed the film for Mother Jones.) The Yale Democrats, who were originally supposed to sponsor the screening, have backed out of the event after learning that it aims to be a “teachable moment” focusing on McChrystal’s presence at Yale. Here’s the Yale Daily News‘ Esther Zuckerman:

[Dems President Ben Stango] said his organization supports the film and its message, but that the Dems, who he said consulted Yale faculty and other advisors about the decision, did not want to us the event as a means to protest McChrystal.

This is really weak tea. I’m not aware that anyone questions the basic facts of McChrystal’s involvement in the Tillman matter. Here’s what happened: even though McChrystal knew that Tillman had been killed by friendly fire, he nonetheless recommended him for a Silver Star for valor “in the line of devastating enemy fire.” Later, McChrystal was nearly demoted for misleading investigators. (Jon Krakauer wrote perhaps the best summary of the McChrystal-Tillman incident.)

The Tillman documentary doesn’t even get into McChrystal’s time in Iraq, when he supervised and at times personally accompanied Task Force 6-26, which operated the notorious “Camp Nama” (short for Nasty-Ass Military Facility). The Red Cross did not have access to the facility or its “black room” interrogation cell. Reports by human rights groups and journalists suggest that at least two men were tortured to death at Camp Nama. (Andrew Sullivan has a good wrap-up here.)

This isn’t to say that Yale should or shouldn’t employ McChrystal. But there’s no reason that talking about his past should be off limits. The Yale Dems would do well to remember that McChrystal had to resign because of the comments that he and his subordinates made about the President—a Democratic president, no less. Backing out of sponsoring the Tillman movie sends the wrong message about the acceptability of debate about McChrystal’s history. If Stango feels McChrystal needs his protection, he should go to the movie and explain why—and turn what he fears would be a one-sided attack event into an interesting and informative debate.

Look: McChrystal is a tough guy. He’s been criticized before. Essentially, he’s been personally fired by the President of the United States. I have no doubt that he would vigourously defend his actions with regards to Camp Nama and Tillman. He’s a grown man, a general, and a widely acknowledged badass. He doesn’t need the Yale Democrats to protect his feelings.