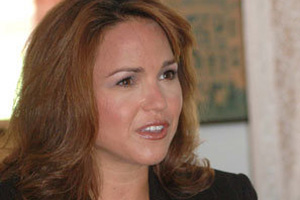 Christine O’Donnell’s massive upset of Rep. Mike Castle in Delaware’s Republican Senate primary has been cast as one of the tea party’s biggest coups. After her campaign caught fire among tea partiers nationwide, the Tea Party Express pledged to sink some $250,000 into the race and repeat Joe Miller’s surprise primary victory over Sen. Lisa Murkowski in Alaska. O’Donnell herself has remained focused on the tea party’s hallmark crusades against big government spending throughout her race, slamming Castle for his support of the TARP bailout and cap-and-trade climate change legislation, all while avoiding social issues. But O’Donnell’s victory also marks a step forward for the Christian right, which her campaign has quietly begun to court—and which could end up riding the tea party wave back into the halls of power.

O’Donnell first came into the public eye in the 1990s as a foot soldier of the religious right, becoming a press secretary for the anti-abortion group Concerned Women for America, which aims “to bring Biblical principles into all levels of public policy.” A devout (and still unmarried) Catholic, she founded the Savior’s Alliance for Lifting the Truth, which promoted abstinence and Christian sexual values among college students—an effort that resulted in her now-infamous crusade against masturbation. In 1997, she denounced the government for devoting too much money to AIDS treatment and prevention, criticizing a drag queen ball for celebrating “the type of lifestyle which leads to the disease.” From the gays and abortion to evolution—which she’s called “a theory” that “too many people are blindly accepting…as fact”—O’Donnell has been a Christian right champion.

In her current Senate bid, O’Donnell has campaigned more as a tea partier, preaching against government spending and Democratic overreach. But she has also used the money that anti-government activists have poured into her campaign to obtain support from Christian and evangelical activists. According to filings with the Federal Election Commission, the O’Donnell campaign in June paid over $5,100 to Response Unlimited, which bills itself as “the nation’s best and most comprehensive source of mailing lists for conservative and Christian mailers and telemarketers.” Major social conservative outfits—from the Christian Coalition of America to Jerry Falwell’s Liberty University—have used the Virginia-based firm in the past to raise funds from conservative Christians. Back in 2005, the company drew fire for brokering a deal with Terry Schiavo’s father to buy his list of supporters while Schiavo was still alive in a vegetative state.

Response Unlimited’s president, Christian activist Philip Zodhiates, says O’Donnell hired the firm to put together a direct-mail package for fundraising. He notes the mailing hasn’t been sent out yet, but his company is now talking with the O’Donnell campaign about how to use it to reach supporters most effectively. “First, philosophically we are in tune with conservative candidates,” Zodhiates says. “And secondly, we’re very good at what we do in raising money.” (After winning the primary this week, O’Donnell was left with little in the bank, but the day after her upset win, she tweeted that more than $500,000 in new donations had flooded her campaign.) The campaign listed the Response Unlimited expense as “voter files,” suggesting that O’Donnell may use the information to reach out to prospective voters as well.

Though Zodhiates admits that the Christian right has “in some respect been eclipsed by the tea party movement,” he believes that candidates continue to benefit from his firm’s services because the country’s conservative and Christian audiences still overlap significantly. “Generally Christians are very conservative, and for the most part, a great deal of those who consider themselves conservatives are also Christians,” he says. “A great percentage of those that would consider themselves part of the tea party movement would hold very conservative beliefs…[on] issues like abortion [and] homosexual marriage.”

O’Donnell has supplemented her Christian outreach by buying lists from an online marketing firm called American Church Lists, according to her FEC filings. She’s also hired religious-right activists for her campaign. One of the O’Donnell campaign’s senior aides, the Rev. Jason McGuire, was formerly executive director of New Yorkers for Constitutional Freedoms, which called for Christian activists to “Pray 4 Your State Senator” to vote against the state’s gay marriage legislation. McGuire was retained to help with “social networking and evangelical outreach,” and the campaign also hired a Pennsylvania-based “faith-based outreach coordinator,” Ronald Robertson, to assist these efforts.

A beneficiary of both tea party anger and religious right fervor, O’Donnell represents the potential overlap between Christian conservatives and anti-government activists. She’s building this coalition just as the religious right’s old power players are trying to ride the coattails of the tea party back into the spotlight. At his Faith and Freedom conference in Washington last week, former Christian Coalition director Ralph Reed attempted to cast small-government conservatism as an extension of God’s will. As my colleague Stephanie Mencimer reported, national tea party leaders like Mark Meckler are harping on the “removal of God from the public square,” suggesting a possible marriage between the two movements. Sarah Palin, beloved by tea partiers and Christian conservatives alike, has laid the groundwork for this union to happen—as has Glenn Beck at his overtly religious rally at the Lincoln Memorial last month.

Though O’Donnell may be trying to cast herself more as a tea party conservative than a Christian rightist, Democrats are now claiming that if she becomes a senator, she’d use her office to push an agenda that goes far beyond fiscal concerns. After her victory on Tuesday, the Democratic Senatorial Campaign Committee blasted her and other Republican nominees for caring “more about imposing a strict social doctrine than creating jobs.” Christopher Barron, chair of GOProud, a pro-gay Republican group, warns that if such candidates end up coming into office, they “need to remember why they’ve been nominated and sent to Washington—concern over size of government and spending.” He adds, “If they decide to run down the social-issue rabbit hole, they do so at their own peril.”