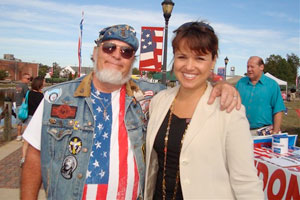 Pulling off one of the biggest upsets of the 2010 primary season, tea party insurgent Christine O’Donnell defeated Rep. Mike Castle in the Delaware’s Republican Senate primary. O’Donnell won 53 to 47 percent with the final ballots still being counted Tuesday night, shocking observers across the political spectrum. Castle, a veritable political veteran, appeared to have a clear path to victory until a poll from Public Policy Polling came out last week showing O’Donnell ahead by three points, having received a last-minute boost from national tea party groups that poured money and grassroots support into the race.

The question now is what the national GOP will do with O’Donnell. Just how far to the right are their national leaders willing to go to play to the tea party base and do anything to oppose the Democratic agenda? The GOP establishment poured an unusual degree of invective into its crusade against O’Donnell, casting her as completely unelectable in a reliably blue state that went for Obama in 2008 by a 25 percent margin. Without the Delaware seat, the GOP’s chances of winning back the Senate majority have diminished significantly. Minutes after O’Donnell’s victory was called, Beltway GOP operatives were aghast. It’s the “worst night for GOP since passage of Obamacare,” tweeted Republican new media consultant Patrick Ruffini. “Congratulations Sen. Chris Coons (D-DE).”

Certainly, the GOP might finally be willing to distance itself from one of the tea party darlings. While there’s been considerable infighting in other Republican primary races, the GOP has never been bested by a tea party candidate with so little chance of winning a Senate seat. In addition to adopting all the usual hard-line views on the major issues, O’Donnell has equated masturbation with adultery—advocating self-abstinence, let’s say—and has lied repeatedly about her education and political accomplishments. Though other tea party candidates have voiced extreme positions, O’Donnell appears to have transgressed an outer limit that even Nevada Republican nominee Sharron Angle couldn’t reach.

It’s doubtful whether the national GOP will want to put any resources into her bid. “They’ll have to make that call,” says Tom Davis, a former House Rep. and chair of the National Republican Congressional Committee. A long-time Castle supporter, Davis considers O’Donnell’s chances of winning the general election “miniscule.” On Tuesday night, the National Republican Senatorial Committee would only say that they were “watching” the race to decide what they would do, and there are already reports that Republican strategists have written off the state entirely*. While O’Donnell might continue to draw grassroots tea party support, the national movement may decide their money might be better spent backing Angle or another candidate with a feasible chance of winning. “The right wing world will move on…to the new new thing,” says Davis. “She’ll be their darling for a week or so, then she’ll have problems being competitive financially.” With only about $20,000 of campaign cash currently on hand—versus Coons’ $900,000—O’Donnell stands even less of a chance if she doesn’t get another avalanche of backing.

The right-wing crusade against Castle always seemed more like a symbolic than pragmatic assault, even before the race blew up in the national spotlight. There were few targets in the GOP who were more tempting: as one of the only remaining moderate Republicans in Congress, Castle continued to stay true to his bipartisan rep, even after almost every other member of his party had deserted the center. With Castle gone, the moderate GOP caucus in the Senate will be small indeed—regardless of whether Coons or O’Donnell ends up winning in November. If the ultimate goal of the tea partiers really is to push the party farther to the right—rather than win as many Republican seats as possible—then their work in Delaware really might be finished.

*Update: Conservative activists slammed the GOP leaders for not being willing to commit to O’Donnell, and NRSC has capitulated by donating the maximum amount possible to O’Donnell’s campaign. The GOP is now truly, utterly ruled by its base–whether it likes it or not.