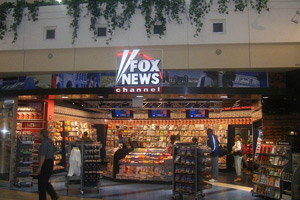 After Glenn Beck blamed Obama for harboring a “deep-seated hatred for white people” during a morning chat on Fox and Friends more than a year ago, ColorofChange.org‘s director James Rucker decided that enough was enough. “Beck’s comments about the president perfectly captured what has been going on at the network for a long time,” Rucker told reporter Alexander Zaitchik, who wrote about the incident in our July/August issue this year. Color of Change is an online civil rights group focused on strengthening the political voices of people of color. Under Rucker’s direction, it successfully urged several advertisers, including Best Buy, Wal-Mart, and RadioShack, to pull their ads from Beck’s show. But Rucker didn’t exactly get the outcome he was hoping for. Fox News did nothing to reign Beck in: instead, he’s been allowed to blather on with few boundaries ever since. “Nothing has essentially changed,” says Rucker. So Color of Change has launched an even larger offensive: convincing local businesses to silence Fox News.

Rucker had been bothered by catching glimpses of figures like Beck on television in the gym or restaurants. True Fox devotees, who see the world through that lens, should be able to watch Fox in their own homes, says Rucker. “But no one else should be subject to that.” The Turn Off Fox campaign, which launches today, wants to de-legitimize Fox in public places. The campaign provides anyone with a kit, including instructions on how to persuade store owners to become “Fox-free” and a flyer detailing why.

“Fox’s race-baiting and fear mongering is more than just deceptive and offensive,” reads the campaign literature. “It’s bad for the country, it’s dangerous, and it can result in violence.” In a letter asking for signatures, Turn Off Fox makes a case for how Fox’s divisive reporting has sparked recent acts of violence. For example, when a man open fired at highway cops on an Oakland freeway in July, he told them that he wanted to start a revolution, with planned bloodshed at the Tides Foundation in San Francisco. Tides is a little-known non-profit, argues Turn Off Fox, that Glenn Beck chose to demonize on his show. A report by Media Matters suggests that the trigger-happy man could have drawn inspiration from Beck’s proselytizing, and the shooter’s mother admitted that her son “watched the news on television and was upset by ‘the way Congress was railroading through all these left-wing agenda items.”

But will an attempt to shut down Fox backfire? When Beck’s advertisers pulled ads from his show, Beck urged his viewers to support him. “Even as advertisers fled, Beck was clocking record audience members,” reports Zaitchik. But Rucker argues that the middle-of-the-road viewers will choose to distance themselves from Fox News, while the devotees “will show themselves for who they really are.”

And what about the First Amendment in all of this? Turn Off Fox is not suggesting that Fox News shouldn’t be able to broadcast what they want, nor does it want the government to shut down the channel. But claiming to be a news organization and not meeting the standards of news, argues Rucker, is reason enough for it to be shut off from broadcasting in public places. As the campaign letter explains: “The issue is whether businesses and public places want to be a conduit for Fox’s consistently divisive rhetoric, race-baiting and distortions of the truth.” The campaign targets captive audience situations, where viewers have little to no choice what they are watching (think airplanes, restaurants, and lobbies). As Marty Essen, founder of an almost-identical campaign called Turn Off Fox News, writes in a Missoulian article: “If changing the channel from Fox News is censorship, then the reverse is also true—tuning in Fox News censors all other channels!”