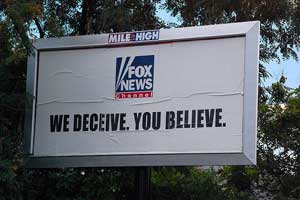 As David pointed out in his Politics Daily column Wednesday about the feud between Fox News and the White House, “Fox is just not worth a game of chicken.” I would go one step further and suggest that, for all of its obvious flaws, Fox and its out-sized viewership are still very worth Obama’s time.

Following statements by White House Communications Director Anita Dunn describing Fox as “opinion journalism masquerading as news,” media watchdogs and left-wing pressure groups have turned up the heat on the network.  Yesterday, Media Matters sent around a press release drawing attention to Fox’s use of outdated or dubious polls that suggested its audience is as balanced as its coverage famously claims to be. MoveOn is urging Democratic lawmakers to boycott Fox News.

The attention is not unwarranted. Dunn was merely voicing what every Daily Show viewer has known for years. The fastidious fact-checkers at Media Matters caught Fox News playing up last year’s biennial news consumption survey from the Pew Research Center while ignoring its less favorable but more recent media attitudes survey and called out political analyst Dick Morris for quoted some unbelievable numbers on air.

A boycott, however, is the wrong kind of attention. The White House and MoveOn can call Fox News’ coverage whatever they want: opinion journalism, partisan hackery or outright lies—all labels which have applied in the past. That’s not cause enough for the Democrats to ignore Fox News and the millions of voters who watch it.

There is no denying the conservative bent of both the network’s coverage and audience but it is also important for lawmakers and the White House not to forget that there is still sizable minority of self-described Democrats and Independents who tune into Fox News. As Media Matters notes, this section of the viewing audience is smaller than Fox claims—regardless, it is still too large to overlook. In its argument against disengaging with Fox, The Economist noted Ben Pershing’s observation about the network’s audience: “Maybe they’re mostly ‘right-leaning’ but that doesn’t mean they’re 100 percent unpersuadable.”

Obama and Democratic lawmakers need to be on the network interacting with Fox anchors (perhaps using some well-calibrated “dismissive humor,” as David suggests) and the swing voters who are influenced by their unfair and unbalanced reporting. Like it or not, Fox News still matters.