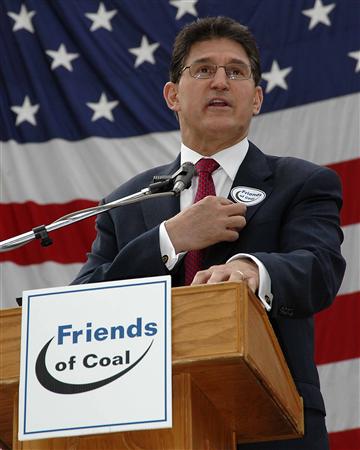 West Virginia’s Democratic Gov. Joe Manchin said Wednesday he would “highly consider” making a bid to fill the seat vacated by Sen. Robert Byrd’s death last week. The state law on whether to hold a special election to fill the seat this November, or wait until Byrd’s current term finishes in 2012, is unclear, and the state attorney general has yet to weigh in. Manchin said he supports a race this fall because “two and half years for me to appoint someone to replace this giant, Robert C. Byrd, is far too long.” And Manchin just happens to have his eyes on the seat.

In a press conference yesterday, the second-term Democratic governor also didn’t rule out getting the state legislature to change the law so that they can hold the special election this fall. In the meantime, Manchin will likely appoint someone to keep the seat warm for him who is largely in line with his views (he’s already said he won’t appoint himself, but has made it clear that he has national ambitions). Manchin stands a good chance of winning, whether it’s this fall or in 2012; he won reelection in 2008 with almost 70 percent of the vote.

Neither Manchin nor a placeholder would be a particularly good addition to the Senate when it comes to climate and energy legislation. To call Manchin a champion of coal would be an understatement; last year he named coal the official state rock. Last month he pushed the state legislature to introduce a resolution condemning action on climate change. He also cheered West Virginia’s junior senator, Jay Rockefeller, for trying to block the EPA from regulating greenhouse gases.

Byrd, long a champion of coal, came around on the issue quite a bit near the end of his life. He blasted the effort to neuter the EPA an “extreme” move that would “dismiss scientific facts” about climate change. He also penned an op-ed last December on the need for coal to “embrace the future” and stop denying “the mounting science of climate change,” and was critical of mountaintop removal, a mining practice that has brought environmental devastation to the state.

Ken Ward at the Charleston Gazette tried to ask Manchin’s spokesman about whether he would appoint someone in the mold of Byrd or himself on climate change, but didn’t get a straight answer.

Manchin is also pro-life and an NRA member, so I don’t expect progressives are going to get particularly excited about him in any case. But on climate and energy issues, Manchin or his seat-holder will probably have to vote on some manner of legislation in the very near future. Byrd became a fairly reliable vote for climate action, but the next senator from the state probably won’t carry on that legacy.