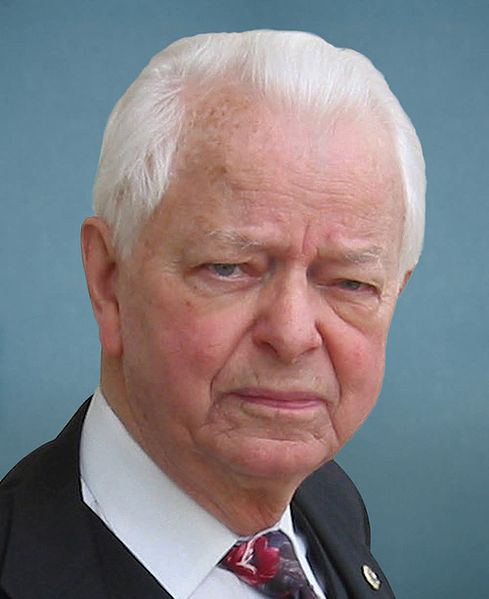 Photo courtesy of <a href="http://commons.wikimedia.org/wiki/File:Robert_Byrd,_official_photo_portrait,_111th_Congress.jpg">Wikimedia Commons</a>.

The two Democratic senators from West Virginia, America’s coal capitol, are at odds over the future of the official state rock. One long-time coal champion, Robert Byrd, is siding with the Obama administration Environmental Protection Agency’s plans to regulate emissions, while Jay Rockefeller  yesterday unveiled plans to delay the agency’s new rules on planet-warming gases. Byrd, the 92-year-old senior statesman from West Virginia, said he’s sticking with his plans to help coal find a place in a new energy policy, rather than attempting to delay inevitable regulations.

Byrd said he was “encouraged” by the response last week from EPA Administrator Lisa Jackson to the letter that he and other coal-state Democrats sent requesting more information on pending rules. “Following up on my previous conversations with her in my office, I take her at her word,” said Byrd in a statement, via Coal Tattoo.

In the statement, Byrd reaffirmed much of what he said in his surprising December op-ed citing the need for the industry to recognize the mounting science on climate change and become “honest brokers” in policy discussions. “I am continuing to have significant discussions about how to ensure the future of coal as a long-term energy resource,” he said yesterday. “I am reluctant to give up on talks that might produce benefits for West Virginia’s coal interests by seeming to turn away from on-going negotiations.”

Byrd’s fellow Democrats on the House side, Nick Rahall and Alan Mollohan, have introduced legislation identical to Rockefeller’s, and they also voted against the House climate and energy bill last June that would have superseded EPA regulations and flooded $60 billion to the coal industry. So far, it seems like only Byrd is the only West Virgina legislator willing to get serious about the climate and energy challenges.