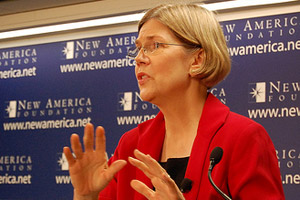 This interview first appeared on the New Deal 2.0 website.

Senate Dems are making the final push on financial reform this week, but will big banks really change the way they do business? Or will we still be pawns in a game rigged in their favor? I caught up with Elizabeth Warren to talk about the need to reform Wall Street culture, the pernicious influence of bank lobbies, and the debt-fueled threat to America’s middle class.

LP: Has the financial crisis changed the culture of Wall Street?

EW: I would have expected the financial crisis to sweep through Wall Street like a hundred-year flood — wiping out old business practices and changing the ecology profoundly. So far, the financial services industry has seemed to treat the crisis like a little rainfall — inconvenient, but no significant changes needed. The real question moving forward is how the industry will respond to Wall Street reform and growing public anger. Will it react to all the new cops on the beat just by hiring more lobbyists? Will it continue to spend $1.4 million a day to beat back anything that could mean more accountability and oversight? Or will the financial services industry finally begin to rethink its business models, lobbying approach, and attitude toward the public?

Let me put it differently: meaningful rules in the consumer credit market can accelerate economic recovery, I really believe that. Rules would increase consumer confidence and, more importantly, weed out all the tricks and traps that sap families of billions of dollars annually. Today, the big banks churn out page after page of incomprehensible fine print to obscure the cost and risks of checking accounts, credit cards, mortgages and other financial products. The result is that consumers can’t make direct product comparisons, markets aren’t competitive, and costs are higher. If the playing field is leveled and the broken market fixed, a lot more money will stay in the pockets of millions of hard-working families. That’s real stimulus — money to families, without increasing our national debt.

LP: Why is marketplace safety so much harder for people to accept than safety in other realms?

EW: Think about it: cars, toys, aspirin, meat, toasters, water — nearly every product sold today has passed basic safety regulations well in advance of being marketed and sold. But consumer credit is a kind of buyer-beware, wild west. That is partly the result of history. Usury laws that existed since Biblical times, through the colonial period and into the 1980s, provided basic consumer protection. Once those laws were quietly undercut, the industry moved to a tricks-and-traps business model. The big banks would promise something for free, like credit cards or checking accounts, or for very low cost, like teaser-rate mortgages, then make their money on the back-end with fees and interest rate escalation. Most people don’t know they have been fooled until it is too late. Last year, for example, families paid a total of $24 billion on overdraft — mostly on “free” checking accounts. People can see exploding toasters, and the newspapers run plenty of headlines about lead in children’s toys. But smaller hits, day after day hitting millions of people, don’t catch the same kind of attention — even though fixing those hits will help make people much more secure over time.

LP: What are the consequences of distrust in the marketplace? How does it affect our social fabric?

EW: For three decades, the once-solid, once-secure middle class has been pulled at, hacked at, and chipped at until its very foundations have started to tremble. Families have done their best to adjust — sending both mom and dad into the workplace, cutting back flexible spending on food, clothing and appliances, and spending down their savings. When they learn that they have been tricked — a $39 fee that they shouldn’t have to pay or an escalating mortgage that will cost them their home — they start to wonder who wrote the rules that allow that to happen. Distrust spreads everywhere — to industry, to politics, to the institutions that were supposed to make us a stronger country. The costs imposed by a banking industry that makes its money tricking people go far beyond dollars.

LP: Have lenders and creditors preyed on our human weaknesses? Do they drive us to be profligate and irresponsible?

EW: Personal responsibility matters. There are no excuses for those who spend money on things they cannot afford. But it’s a whole lot harder to act responsibly when consumer credit contracts are designed to be incomprehensible, when prices are obscure and risks are hidden. I would like to see a world where families can read their credit terms and easily shop for better deals. When we get to that world, it will be a lot fairer for families to be held to every last clause they agree to.

LP: How can consumer trust be restored?

EW: First, big banks can stop pouring so many resources into blocking meaningful reform. Families have made it clear that they are sick and tired of all the lobbying and that they think enough is enough. From the beginning, I think the Wall Street banks underestimated the furor they would provoke by acting like nothing changed and continuing to lobby just like they did before the bailouts. I also think they underestimated the good faith and trust they could have built by cutting back. Second, we need two-page credit card, mortgage, and overdraft contracts. Until the deals are clear up front, until the fine print is gone and the banks price products so people can see the true costs and risks, consumers won’t trust any lender claims. And I don’t blame them.

LP: What is the most important thing ordinary people can do to protect themselves from abusive financial practices?

EW: Get out of debt. In a world of stagnant incomes and rising core expenses like mortgage and health care costs, that’s a lot easier said than done. The middle class is under enormous pressure. But families can stop the bleeding by reducing their reliance on debt wherever they can. They can also start fighting back by taking a hard look at whom they do business with and rethinking whether they want tricks-and-traps banks to hold their money. They can also demand that public officials take the side of families over the side of banks.

Lynn Parramore is Editor of New Deal 2.0, Fellow at the Roosevelt Institute, and author of Reading the Sphinx.