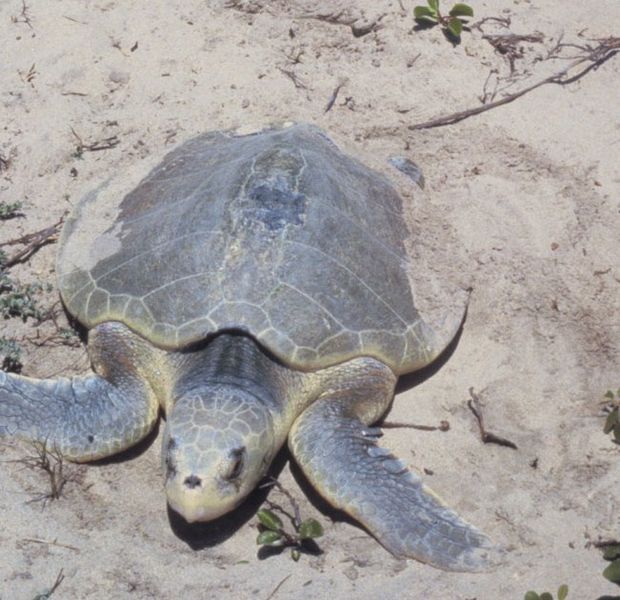 In today’s National Park Service incident reports, an ominous mention of oil-tar balls and mats washing up on Padre Island National Seashore in Texas. No confirmation yet if this is BP Deepwater Horizon oil or not. If it is, that’s bad—obviously—since it would mark the first landfall far to the west of the well site.

More alarming in the report however was the perplexing mention of the release of 116 critically endangered Kemp’s Ridleys sea turtle hatchlings from that same beach where oil was washing ashore on that same day.

Even if the oil-tar on Padre Island doesn’t bear the Oilpocalypse signtaure, I can’t help but ask: Why are they releasing turtle hatchlings anywhere into the Gulf of Mexico at this point? Exactly what future do they imagine lies ahead for these rarest of all sea turtles, 116 of whom may hold the key to survival of the species?

Here’s the incident report in its entirety:

Padre Island NS – Tar balls and tar mats were observed on South Beach yesterday. At mile markers 14.4 and 21.2, tar mats up to six feet long were discovered, while employees observed smaller tar balls floating in the surf.  These items were collected by the park’s hazardous materials team and transferred to the U.S. Coast Guard, where it will be determined if the collected tar balls and tar mats are a result of the oil spill. Visitor interest in Padre Island National Seashore remains steady; a high level of visitor calls, indicating that their travel plans to visit the seashore remain unchanged, have been received. This may be due, in part, to this year’s first Kemp’s Ridley turtle release on the Texas coast.  Yesterday, 116 hatchlings were released under guarded conditions, with over 450 visitors and representatives from three media outlets welcoming the hatchlings and attending the special event.  Researchers from Texas Tech University and the U.S. Geological Survey are in the park devising protocols to collect samples from unhatched Kemp’s Ridley sea turtle eggs to use in conjunction with the natural resource damage assessment process. Padre Island has an extensive program to monitor and protect Kemp’s Ridley sea turtle nests, one of the most critically endangered sea turtle species worldwide.  In previous years, the NPS has attached satellite transmitters to adult females after they nest and then monitored movements.  Many of the turtles tracked entered waters offshore from Louisiana, Mississippi, Alabama, or the west coast of Florida after they finished nesting.