I’ve got a new piece up today looking back at 2008 and the expiration of the long-standing moratorium on offshore drilling. Basically, it’s a reminder that public pressure (egged on by the Republicans’ chants of “Drill, baby, drill”) succeeded in freaking out congressional Democrats, who let the 27-year-old ban on new drilling expire. Had that moratorium been renewed, we wouldn’t be caught up in such a grueling debate on the issue now.

But with millions of gallons of crude flooding the Gulf of Mexico, public opinion is changing. A new Rasmussen poll released Thursday finds that while the majority of the public still favors drilling, that majority is declining. Fifty-eight percent of voters believe offshore drilling should be allowed. But that’s down 14 points since the end of March, when Obama announced his plans to expand drilling. And while most still approve of drilling, 69 percent say they are “somewhat concerned” that offshore drilling may cause environmental problems. (Hmm, you think?)

The decline is across political parties, though Republicans are still much more enthusiastic about drilling than Democrats, with 77 percent favoring it. EnviroKnow put together a chart documenting public opinion on the subject dating back to June 2008: 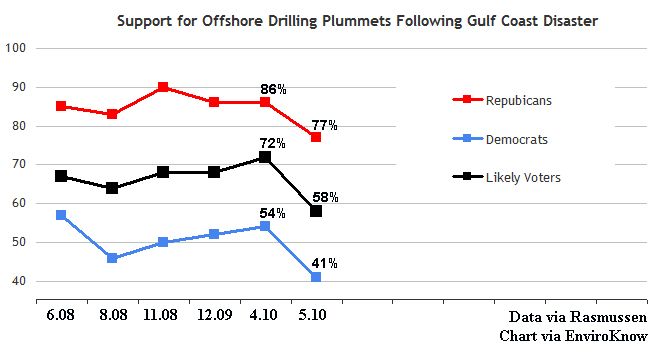