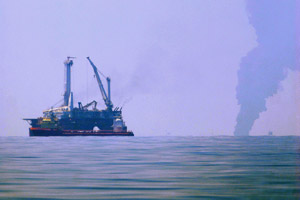 For opponents of offshore drilling, the catastrophe in the Gulf of Mexico came as no surprise. “For some time we’ve been told by the industry that it can’t happen, it won’t happen. It did happen. It has happened before,” said Sen. Robert Menendez (D-N.J.). “This is what we have been saying for quite some time.”

The spill has renewed calls from Menendez and other legislators to halt any expansion of drilling in the outer continental shelf, reviving an issue that got little attention two years ago, when the Democratic Congress allowed the long-standing ban on drilling off most of the United States coastline to expire.

President Obama’s announcement in March that the administration would open new areas of the Atlantic, Gulf, and Arctic coasts to drilling reinvigorated the fight in Congress, but the explosion and spill mere weeks later have brought the situation to a boiling point. A flurry of bills have been introduced in recent weeks calling for bans on expanded drilling. But had Congress acted to maintain the 27-year-old moratorium on offshore drilling—which it allowed to expire in October 2008—the subject wouldn’t be driving the current debate. The ban on offshore drilling wouldn’t have prevented the April 20 oil spill, since it didn’t cover the area of the Gulf where the spill occurred. But the death of the moratorium opened more than 600 million acres of virgin coastal waters to oil and gas development, and Obama’s March move paves the way for lease sales on a large portion of that land.

It all started in the summer of 2008. Gas prices reached a record national average of $4 a gallon by early June. By late June, the political jockeying around gas prices was in full swing. Republican presidential candidate John McCain, a longtime opponent of offshore drilling, reversed his position, decreeing that the moratorium “stands in the way of energy exploration and production.” Days later, President George W. Bush jumped aboard, repealing the executive ban his father had put in place in 1990. Bush called on Congress to do the same, as both bans would need to be removed in order to proceed with drilling. Democratic candidate Barack Obama, also a onetime opponent of offshore drilling, flipped his position on the subject by early August.

As the summer dragged on, the calls for drilling got louder. Republican luminary Newt Gingrich revved up his “Drill here, drill now” campaign. Michael Steele, now the chairman of the Republican National Committee, adapted the slogan to “Drill, baby, drill” in a September 2 speech at the Republican National Convention—and the chant was repeated later that night, with growing enthusiasm, by former New York Mayor Rudy Giuliani and vice presidential candidate Sarah Palin. The chant would come to haunt legislators. As Sierra Club public lands program director Athan Manuel said at the time, “The whole country went crazy when gas hit $4 a gallon.”

With the elections approaching and Democrats hoping to win big, there was little enthusiasm in late September to renew the moratorium amid fears that the public would revolt. “When you look back at that year, it’s phenomenal to think about how big this got with the ‘drill, baby, drill,'” said Manuel. “That was the conventional wisdom, that renewing the offshore drilling moratorium could completely ruin a Democratic year that was going to carry Obama to the presidency.” So the Democratic Congress let the moratorium die a quiet death.

Larry Schweiger, president of the National Wildlife Federation, told Mother Jones that environmental advocates had a hard time getting people to care about the moratorium. “We went to every major paper,” said Schweiger. “We couldn’t get anyone to pay attention.” Now with hundreds of thousands of gallons of oil spilling into the Gulf, the issue is finally getting noticed. Schweiger calls this “a pattern we’ve seen over and over.” When there’s a disaster, people care about the environment. When gas prices are high, the public pressure to drill is back on.

For the most part, the severity and long-term consequences of spills are soon forgotten. Schweiger recalled a recent visit to Prince William Sound, the site of the 1989 Exxon Valdez accident that dumped nearly 11 million gallons of oil into the water. There’s still a layer of oil remnants several inches below the surface. “The fishery has never recovered, and it’s been 20 years,” said Schweiger. It’s a similar story in Santa Barbara, California, where a blowout at an oil rig six miles offshore dumped 200,000 gallons of crude into the channel in 1969. Folks who grew up in the region recall picking tar blobs off the beach well into the ’70s.

The lingering effects from those spills led to landmark environmental reforms, which advocates hope will be the case after the Gulf catastrophe. The Santa Barbara spill helped pass the original moratorium on new offshore drilling, and sped the creation of both the National Environmental Policy Act and the Environmental Protection Agency in 1970. The Exxon Valdez spill helped ease the passage of the Clean Air Act amendments and the Pollution Prevention Act in 1990 and pushed President George H.W. Bush to sign them into law.

“Both of those spills helped shape a generation of action on environment and energy policy,” said Wesley Warren, director of programs at the Natural Resources Defense Council. “We have that moment again. We need to take advantage of it.”

But whether this opportunity will translate into legislative action is unclear. The Obama administration has called a time-out on plans to expand offshore drilling until an investigation into what happened at the Deepwater rig is completed. On Wednesday, Sens. Bill Nelson (D-Fla.), Bernie Sanders (I-Vt.), Jack Reed (D-R.I.), and Dianne Feinstein (D-Calif.) put forward a bill that would take the time-out a step farther, putting the brakes on new exploration, development, and production in federal waters and calling on the White House to drop its new leasing plan. Their measure also calls for a halt to seismic testing, which is used to find new oil reserves, and for existing exploration projects to be stopped until Secretary of Interior Ken Salazar certifies that there is “no significant risk of accident.” New Jersey Sens. Menendez and Frank Lautenberg have also called for a renewal of the moratorium on the East Coast.

Florida Democratic Reps. Kendrick Meek and Alcee Hastings introduced a companion bill in the House, while Rep. Frank Pallone (D-N.J.) has also been leading efforts to try to force the Obama administration to reinstate the executive order imposing a moratorium. All face uncertain paths forward, but there is clearly a renewed interest in coastal protections.

The drilling question is also seeping into climate bill politics, as opponents threaten to filibuster any measure that expands offshore drilling. Obama’s offshore proposal was offered as an olive branch to apprehensive legislators in return for a comprehensive bill; now, it puts his entire energy agenda in jeopardy. The bill’s authors have indicated that they are likely to maintain drilling provisions and downplayed the tension over the issue. But drilling opponents have a renewed fervor.

“The savage scene that’s unfolding in the Gulf could dwarf anything we’ve ever seen before,” said Lautenberg. “The tragedy drives home the need to move away from dirty fuels.”